I figgered this was as good as anyplace to put this post. I might be getting my hands on some cedar elm fairly soon. Not sure just how much, yet. Storms tore the tree up some and a tree service is gonna take it down as it has a wicked widowmaker on it that might even take a tractor out. Ground too soft to get a rental lift in there and be stable. So, I ain't gonna try it. Especially since I ain't moving so fast right now. My experience with the wood is that it is hard, contrary, yet nice looking. I put a bowl I had done some time back below. Just wondering if anybody else has worked with it.

Never heard of cedar elm, but that is a nice looking bowl... good luck with the wood, but be careful.

Oh, me gonna be careful! The only contact I will have with it besides turning it, will be using the tractor to load it into the pickup,(don't think will need the trailer) and unloading it. No danger there. Me thinks??

New one on me... Looks like its a rugged tree though which probably explains some of the cantankerous nature. Looking forward to seeing what's inside it once you haul it home.

I'd never heard of cedar elm. Looks like interesting wood.

This is what Texas A&M Forest Service says about it.

Tree Description:
A large tree to 75 feet tall with a tall straight trunk 2 to 3 feet in diameter and stiff branches that form a narrow, oblong crown.
Range/Site Description:
The most common elm tree in Texas, distributed widely in East, South, and Central Texas. Most often found near streams, in solid stands on flatwoods near rivers, or on dry limestone hills. Also planted widely as a landscape tree.
Leaf:
Alternate, simple, 1" to 2.5" long and 0.75" to 1" wide, oval to elliptical in shape, finely-toothed or sometimes double-toothed along the margin, and blunt at the tip. The upper surface is dark green, shiny, and rough, while the lower surface and petiole are pubescent. Twigs sometimes have thin, corky "wings" and the leaves can turn gold to orange-red in the fall.
Flower:
Appear in late summer or autumn as hairy, short-stalked clusters in the leaf axils.
Fruit:
An oval "samara," 0.25" to 0.5" long, the seed centered in the middle of the wing, deeply notched at the tip and hairy all over, especially along the margin. Seeds are borne in the fall, which distinguishes this species from the other native elms.
Bark:
Light brown to gray, with flattened ridges that break into thin, loose, flaky scales.
Wood:
Reddish-brown, brittle, with a thick layer of light-colored sapwood. The wood is sometimes used to manufacture wheel hubs, furniture, and fencing. Commonly sold in the nursery trade as a landscape tree.
Similar Species:
Winged elm (Ulmus alata) has larger leaves and seeds that mature in spring; varieties of Chinese elm (U. parvifolia) have similar leaves, but the bark is distinctly orange and flaky. 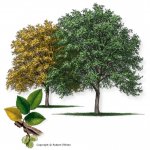