For some time now i have wanted to get to this project and try my hand at making a spatula out of wood.
We have one in our kitchen that is a go to for all sorts of cooking.

So i cut a strip out of a slab of European beech that i purchased originally for this very project.

Here is where i am at thus far.

Its a handtool project after cutting out a blank or two on the bandsaw. 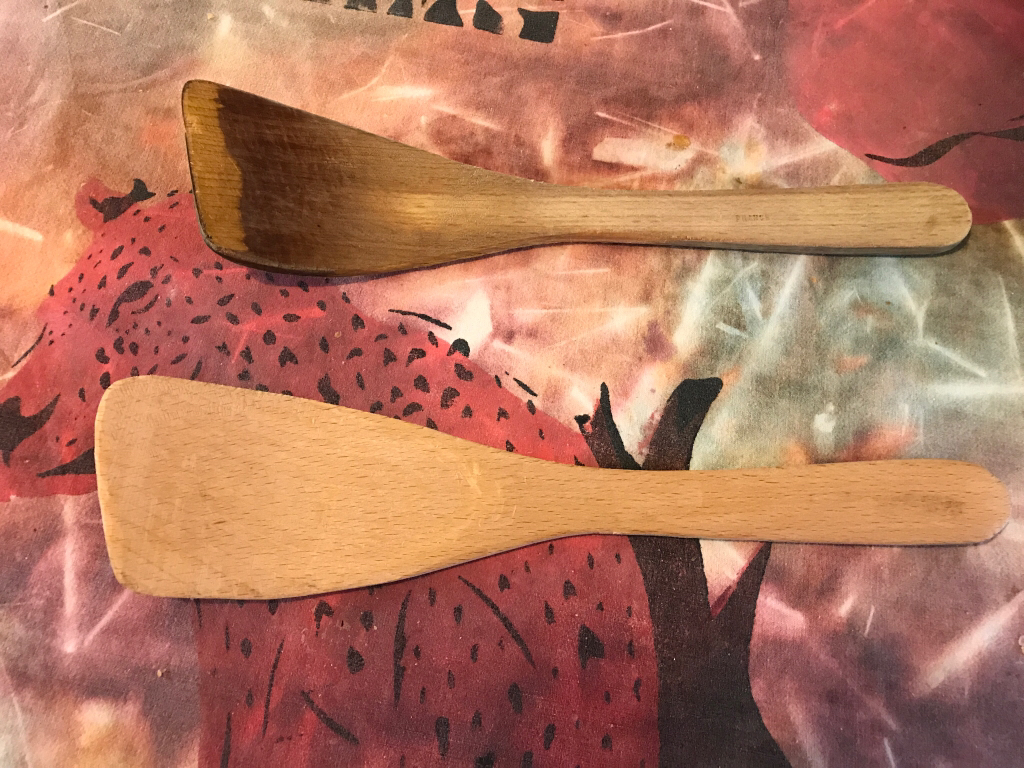 Still a fair amount of work left but a quick fun project yesterday to take my mind off not being at the gathering at Carols place as well as getting out the house while Mil is here.

Looks like a fun project Rob. Do these get a coat of mineral oil or something to finish?

Darren Wright said:
Looks like a fun project Rob. Do these get a coat of mineral oil or something to finish?
Click to expand...

Darren, I've never made any wooden spoons or spatulas, but I've never oiled any of the ones I own. Mine seem to have picked up enough cooking oils over the years to be protected and sealed well. That said, it seems like mineral oil would be a good way to start out with a brand new one.
R

Yeah what Vaughn said we have done pretty much same especially with this wood. But this one i am going to start off its life with a mineral oil coating just for a starter pic so it pops a bit more.

Nice one, Rob. This is a great kind of project. Fun to make, functional, doesn't require a huge investment in tools/materials, plus it offers a chance to make something unique...like maybe a small carving at the end of the handle?

Rob, you have inspired me. I have some cherry trees to cut down along the fence line. Wilted cherry leaves are deadly to livestock. I have always heard fruitwood is best for cookware and children's toys (the wood is not toxic). So, will keep you informed of my cutting and then sawing and then carving of the spatulas and spoons. (now I have to buy some new tools!

Good looking spatula, ought to get the job done quite well.

Johnathan if you can split and rough the cherry blanks to 95% done while the wood is still green then once they're dry just take some light finishing cuts to clean up the fuzz you'll never do it another way. Cutting green wood for things like this is so much easier than dry. Just make sure to clean and lightly oil your tools after as the wet wood can cause corrosion.

How do I control cracking due to drying Ryan?

Some you will loose, but not as many as you might think. The trick is mostly getting the wood thin enough so that it can move as it dries and good placement of the work inside the log, a bit of warping isn't usually a huge problem unless the wood is really squirrelly (like madrona which you have to more to to keep it even vaguely true, cherry is pretty easy to work with though).

Past that there are a couple of tricks that the green woodworkers use to mostly eliminate the residual issues. Most of the time you can get by without doing any of this but it's fairly cheap insurance. Once you've roughed the pieces out, boil them for one hour per inch (measured in the narrow direction of the thickest part - so if the handle is the thickest part and is say 1/4" thick by 1/2" wide you'd boil for 15 minutes+-). This changes how the ligin is structured (in some way that I haven't figured) which stabilizes the shape and also opens up the wood structure some (mostly by removing sugars) which allows more even and faster drying. Secondly manage the drying speed so it's more even, for thin stuff like spoons and spatula I think the easiest is to pack it in fresh shavings (in a brown paper bag) for about a week then air dry. Rake them out of the shavings every day or so (more if the shavings are really wet/dense, less if drier/fluffy) to let the surface moisture flash of and minimize any mold problems. Where you are I'd probably go turn and toss the whole mess several twelve hours and try not to pack it very tight.


Basically all checking is due to some combination of uneven drying and stress in the wood. With thin pieces like this if you get to the wood while it's still dry and at least sort of follow the grain (which is easier to carve and makes the piece stronger as well) you end up with something that dries pretty evenly all by itself and can relieve it's own stress. Part of this is picking "good" pieces of wood, for instance you can figure that denser wood will shrink less than less dense so some attention to the inside versus outside of the log and planning the piece so the outside is allowed to shrink more. The down side of limbs will have the outside of the limb in compression whereas the top side had the outside in tension so the wood will continue behave like that (which is why the bottom of limbs are no good for bow wood but the top is). Ditto that wood shrinks radially so allow for some movement in that direction (or for a spatula consider quartering a piece so the bottom is more likely to stay flat as it dries).

You do also have to get the roughs cut out before they crack, around here that's somewhere between a few hours in summer and several days or maybe weeks in winter. When I'm not actively working on a piece best is to freeze it, or for short term wrap in plastic to keep it from drying until it's thin enough to be safe.