I know several of you are running water cooled spindles. '

Since my shop isn't heated, I just filled mine with rv antifreeze this past spring. I noticed the other day that the silicon lines had turned a brown color and the flow indicator had stopped. I had used the silicon tubing from some of my beer line supplies (co2 lines), so didn't think it would need any cleaning. Seems it must have had some bacteria or something in it. I had a coating of white gunk inside the indicator.

I'm assuming that it was due to the beer line having some yeast or bacteria in it. I thought the RV coolant had some anti-bacterial properties, but not the brand I bought. So, I picked up some distilled water and used some of my beer line cleaner chems to flush and sanitize the system again. Then also used an air hose to clear things out. It's all working again and flowing correctly. I refilled with the same rv coolant, but added a few drops of algae control to it this time. We'll see if this happens again. If so I may have to figure out another solution for coolant.

The brown stain in the line didn't come out with the cleaner. I cut a short piece of it off and tried brushing scraping it inside, but it is just a stain.

For the laser I've been running distilled water, a few drops of the algae control, and a few drops of dawn dish soap. I've not had any bacteria or algae issues with it at all. But it's also in a controlled temp room, so I dont have to worry about it freezing.

Just curious if anyone has had this happen or what they are using for coolant/algae/bacteria control?

the tubing on mine has turned a sort of a brown color but the flow is still there. I did drain mine a few months back because I had to take the spindle off of the machine. I run auto freeze also although freezing is not a worry here.

Don Baer said:
the tubing on mine has turned a sort of a brown color but the flow is still there. I did drain mine a few months back because I had to take the spindle off of the machine. I run auto freeze also although freezing is not a worry here.
Click to expand...

I've not seen any posts on the propylene glycol affecting silicon. I'll need to verify that what I have isn't a dexcool formula as I just read that it does affect some silicone rubbers. I'm not sure about the lines i'm using.
Last edited: Aug 27, 2020

You might want to consider a USP grade as opposed to RV grade as the USP grade is a bit more pure and less likely to break down in use.

I suspect that would be fine with silicon - more info on glycol and dilution rates for a given temperature here, you might want to err a smidge on the conservative side.. but diluting with distilled water (at least in brewery operations... haha yeah extrapolating a bit I know..) helps improve flow so it's a trade off of temperature vs ease of flow. 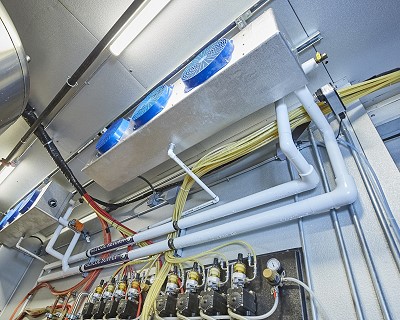 Everything you wanted to know about glycol

Just to be clear. Ethylene Glycol is toxic and cannot be used period because of potential contact with food product. WHAT’S PROPYLENE GLYCOL? To put it simply, its food grade antifreeze. When…

The only plastic/rubber hose material not safe with propylene glycol is polyurethane and even that is in the "mostly ok" catagory.

You might also consider adding a corrosion inhibitor (there are a bunch of food safe ones that are usually some form of Dipotassium Phosphate mixture). It could be you're getting some crud from corrosion inside the system. A good flush, fresh juice and a decent corrosion inhibitor might be in order.

I've used RV antifreeze in roughly a 50/50 water / antifreeze mix in my TIG Welder cooler for several years and never had a problem like that, but I don't remember the brand of antifreeze. I can't weld anymore, since I had the pacemaker installed in me last year, so my son has the welder now. I used to really enjoy micro welding with that thing, but was told that any arc welding or even opening the hood of my car with the engine running was something that I should not do now. I really miss doing the arc welding, but I can still torch weld small things and let my son do the rest.

I started out using antifreeze. I watched my flow rate slowly going away until there was almost none. After a lot of heartbreak, Youtube investigation with no real results and a lot of trying every thing I could think of I took my spindle apart. I found two deteriorated seals. Those seals were NOT easy to get to. I replaced the 2 "O" ring seals and reassembled. The spindle is a little noisier than it was originally, but still works.

I ordered a new spindle. I was lucky enough that my friends machine was still being built in China, so it shipped with his machine, and I bartered the price with what he was paying me anyway.

So I have the new spindle on my machine and the repaired one as backup.

I heat my shop through the winter, rarely goes below about 55 degrees. I have set up some significant filtering with a baffled coolant tank based on what I know in industrial machines. I used distilled water ONLY. So far, no trouble, been about a year and a half or 2. I am getting ready to do some annual maint in the winter. Changing and cleaning the coolant and lines is going to be a part of that.

I was down to a really low flow, but a lot of the white gunk came out when I blew it out and has flowed fine since.

I may have to switch it over to pure polyethylene glycol, what I have says it has some ethanol in it. Or could switch to distilled water for the summer and maybe to a bucket reservoir with an aquarium heater and pump for winter. It is next to my office, which I keep heated, so may consider just putting some lines through the wall and keeping the bucket in there too.