Garden got a new gate!

The previous fence to the garden space was an old screen door.. with some wire mesh fastened to it, held up by some wire of unknown origin. To close it you wrapped two pieces of wire around the top & bottom (poking yourself in the process). Opening was the reverse plus the dragging it back and forth. The opening was a bit narrow for the garden cart or wheelbarrow, you could make it but kind of had to angle it just right.

After having listened to the complaints about the previous gate for a year or so.. I decided I maybe ought to just fix it. And serendipitously a lower woodlot needed some smaller stuff thinned out a bit before fire season..

So I slapped this together out of the thinning that needed to get done from the lower lot. The rails are set into through round mortises drilled through the front and back. The rails are partially held in place by a nail per on each side, but also by the fact I cut the rails a couple weeks earlier than the uprights and assembled with the uprights green so the uprights will shrink and lock the whole thing in place. The diagonal is also wired around each of the rails and nailed to the top & bottom couple as well as the end pieces.

The bottom pivots on a 12" piece of rebar I ground smooth on the top half and hammered into a slightly undersized hole drilled into a piece of black locust set into the ground. Hard to see here, but there are two crossbars locking the rear upright in place between the bracing rails. Both the top and bottom pivots are greased with some axle grease and it swings as smooth as could be.

The main part of the gate is about 7' tall, 8' and change to the braces between the posts. After some discussion I left the rear piece on the gate long after whittling a peg on the end so it can be used as a flag pole There has been no actual decision on the flag as yet although a squirrel skull over a green square on a brown background was suggested... 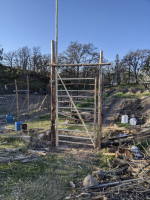 Keep posting pictures and I will figure out where you live... !! May drop by some day on my way to Portland... When I was a little kid... I remember the main hi-way went through The Dalles. My dad would stop at a church... you can see it from the main hi-way now.. It had a slid the went was circular, he would stop and let us kids go down it.. I lost a shoe out of our car on the way to Portland one time. I caught heck for that... on the way back it was still in the gutter along the main road through The Dalles .. got it back...

Paul Douglass said:
Keep posting pictures and I will figure out where you live
Click to expand...

I doubt you'd find this place at least not very easily, this is still actually at my friends lot I've kind of taken over this small chunk of for a few years.. And it's a wee bit out of town.

I'm closer to downtown, well.. not really downtown but in town anyway.

Nice looking gate. Got my vote for the squirrel skull.

I just paid $169 for a 12' wire filled gate at Tractor Supply, but I like yours a lot better. Plus one on a skull.

Ted Calver said:
I just paid $169 for a 12' wire filled gate at Tractor Supply, but I like yours a lot better
Click to expand...

I'd bet mine opens and closes easier as well

Although time versus labor, even considering the poles were basically free, I'm only a bit ahead of minimum wage building this to compare at $169.. For a 12' gate you'd need some decent sized posts and poles.. so.. unless you had a good supply of those.

If I was going to do very much of this I'd have to get a round tenon cutter instead of shaping all the ends with an axe/drawknife which would speed it up quite a bit. Plus setting up a proper pealing rig.. all not worth it for a one off.. 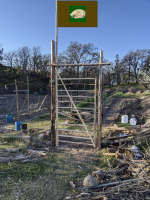