speaking of costco.........I ran out of multigrain cherrios so I picked up a box in the local supermarket...big chain called king kullen
6.99 for 12 ounce box....ridiculous...even at 4.99 I thought it was high

went to costco, 36 ounces of cherrios multigrain for 6.99

gotta really know prices these days. on everything, especially meats....even though I prefer one local meat place, it may become only a treat now and then if prices keep going like they have been.

allen levine said:
gotta really know prices these days. on everything, especially meats....even though I prefer one local meat place, it may become only a treat now and then if prices keep going like they have been.
Click to expand...

Another way to save on meat is to look for the managers special. The meat is typically close to the sell by date but if you buy it and freeze it or use it right away you can save usually more than 1/2 price. 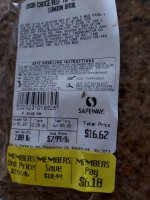 i always thought that manager's specials were from the cows that died before they could kill them....
then again, when my dad had his store, the meat dept would get what was called barrel beef, for making hamburger.
there was nothing wrong with the beef, only that it was from milk cows that were past their prime.
they were rendered down for the meat, and packed in those cardstock barrels. every now and then, you would come
across something good, like a good sized boneless eye of round roasts, and we would cut nice, thick, round steaks.

If the cattle can't walk in under their own power, they can't be slaughtered per regulations. No wonder we sold out already for Oct. at $3.75 a pound hanging weight.
A

King kullen had London broil on sale this week 2.99 lb
Gotta grab em while they are on sale
A

Left the truck parked and took #1 wife's car to town today. Her Lexus gets okay MPG but not great (24mpg at 70mph). Better than the Tundra though. Gas was $4.49 at all the stations we passed... I gotta go get diesel for the mower and tractor sometime... I'm dreading it.

I usually buy diesel 10 gallons (2-5 gal. cans) at a time for the tractor; a few weeks ago I needed to fill the cans. It was $5/gal then, so I only took one can and filled it. Now it's $6/gal around here.....guess I should have went ahead and filled both. For the mower I usually burn a little over 3 gallons each time I mow. I've never been one to mow once a week or every 5 days or whatever. I mow when the lawn needs it, and during dry spells that can be several weeks between mowings. But now I'm trying to go 9-10 days at least between mowing, and with the spring weather that's not always possible.

Hmmmmmmm, how many wives do you have Alan???
A

Jonathan Shively said:
Hmmmmmmm, how many wives do you have Alan???
Click to expand...

Just one and only one. I've learned my lesson. Had this one for 46 years.

premium at my station is up to 5.73 but at the station a half mile its up to nearly 6 bucks a gallon.

wont be long and we will have seven dollar gas.

We kinda had what Jim described happen. At a couple of places, it was $5.09 yesterday, and that dropped to $4.97 today. It feels like the stations are anticipating the next increase and sometimes overshoot the mark.

Dad's prices didn't change until the tanker was unloading, depended on the price of that load.
A

Ive been asking around to alot of people.
I should mention most of the people I ask live here on long island and arent surviving on fixed incomes.
most will not cancel their summer plans, but because of high cost of gas and food, and stock market hurting whatever they have invested, its more likely they wont be doing anything for a while after their summer trip.
so the hospitality business and airlines might not hurt right away, but I think by years end if this keeps up there are going to be tremendous amounts of jobs lost due to lack of business.
I cut three days off my 30 day summer road trip. IL will not save anything in gasoline, but will save some hotel expenses as well as eating out expenses.

we have not done much spending at all in recent days....elen has a car that is over a year old, she has 1600 miles on it. I have a leased car, in 2 years, and this is with a trip out to the rockies last summer, I am 10 thousand miles ahead of my lease allowance.....like I said, we havent been doing much.
gotta cut back somewhere.
A

I mowed about an acre this morning before the swelter started. Trying to keep water on the yard and garden takes up more time than cutting it back.