Back in the days when I was selling a lot of boxes most of my sales were to women. Women bought jewelry boxes, decorative boxes and boxes for their children. There were a few men who were customers but by a large margin women bought most of the boxes. On occasion a woman would ask about a box specifically for a man or seek to commission a box for a man.

So I came up with some boxes that I called Gent's boxes. They were designed to give a gentleman a place to empty his pockets. These boxes were large enough for a wallet, a money clip, a watch, an ink pen or two. They were temporary storage boxes rather than jewelry boxes..

The first is made from bubinga and figured maple. 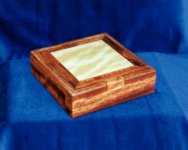 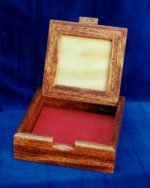 This one is made from Carpathian elm burl veneer and walnut. It has some dividers at the gentleman's request. 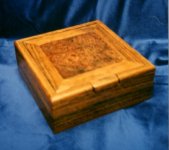 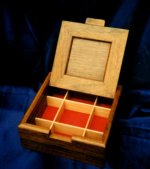 This Gent's box had a tray. It was built from walnut and walnut veneer and utilized Soss hinges and decorative jack chain. 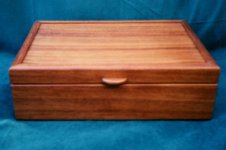 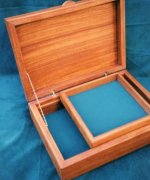 This Gent's box was made from Lauan mahogany which I dyed with traditional red mahogany dye. It is hinged with quadrant hinges. The simple dividers were based on the golden ratio. I don't have a picture of it closed. 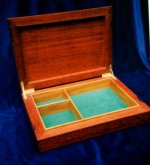 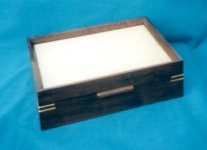 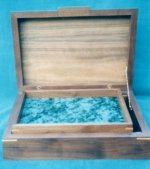 Nice collection continues! I like the burl and the walnut veneer ones, harder to tell but I'm betting the Luan was a looker in real life as well.

It's also a pretty interesting overview of some of the hinge systems. Those quadrant hinges are super nice looking.

I especially like the elm/walnut model, although unlike your customer, I would prefer no dividers.

I especially like the elm/walnut model, although unlike your customer, I would prefer no dividers.
Click to expand...

I would have preferred no dividers as well. I tried to talk him out of it but, as we all know, the customer is always right.