How does this work? - Ellipse Jig

I just recently made a circle cutting jig for my router. I was looking through Rockler's site and I saw that theirs says it will cut an Ellipse along with a circle. I read the instructions that they posted for making an ellipse, but it doesn't make any sense to me.

If anyone can explain how this works, it would be appreciated.

It would be great if I could use the jig that I made to cut both circles and ellipses.


Here is the product that I am refering to:
http://www.rockler.com/product.cfm?Offerings_ID=17282

Designed for use with just about any plunge router, the Rockler Ellipse/Circle Router Jig lets you cut circles and ellipse shapes over a wide range of dimensions and proportions. Set up takes only a couple of minutes and is virtually math-free. Using the jig is just as easy. As you move the router through the cut, the jig's sliding dovetail mechanism keeps the router precisely on the cut line.
Maximum length for major axis is 52".
Maximum difference between minor and major axes is 8".
Includes jig arm, jig base, two dovetail keys, and two locking pivots.
Single pivot can be locked to make circles up to 52" diameter.
Pre-drilled for Porter-Cable 690/890 routers or routers with 6" base footprints.
Made from 1/4" thick phenolic for durability.
Click to expand...

Sean, there have been some plans in some of the WW mags in the past to build a jig for cutting elipses, and I have seen at least one on the web, but can't seem to remember which site it was on. Your circle cutting jig could be used as "Part" of the jig to cut elipses, but you would have to make the shuttle block that is the black square in the LV picture with the blue slides in it, and you would also have to make a spacer block to go under your router to raise the trammel up at that end to match the thickness of the elipse shuttle block. You connect the trammel in two places, (at each of the blue slides in the shuttle block). When you rotate the trammel around, one shuttle block cannot move but the other one will until it is at the end of it's travel, then the other one will move in it's slot, (due to the angle of the tramel at that point). These movements vary the radius as the trammel moves around in a circle, forming the elipse.

(probably not a very good description, but hopefully you will get the idea).

Norman Hitt said:
Sean, there have been some plans in some of the WW mags in the past to build a jig for cutting elipses, and I have seen at least one on the web, but can't seem to remember which site it was on.
Click to expand...

IIRC, it was somewhere on Popular Woodworking web site. I do have a printed hardcopy at home somewhere.

Si señor, that's the one I was talking about.

Alex,
it is nice to know you can speak spanish.
Saludos cordiales
Alfredo

Norman Hitt said:
It's kind of like a puzzle with a crank on it.
Click to expand... 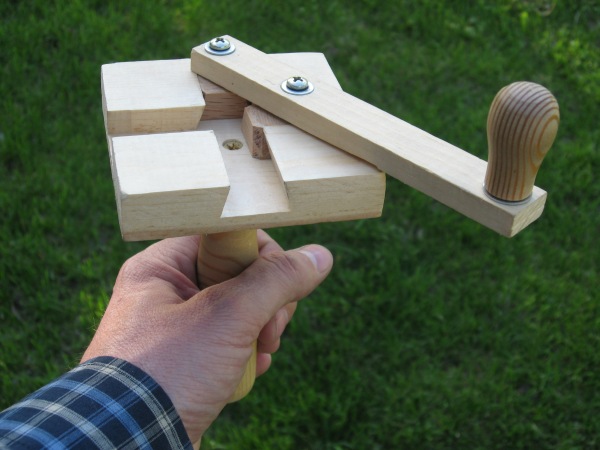 Toy made from scraps circa 2000. Picture taken 10 minutes ago.

Kerry Burton said:
Or, as seen here ... a crank (meaning me

Toy made from scraps circa 2000. Picture taken 10 minutes ago.
Click to expand...

Fantastic, Kerry. That's "EXACTLY" what I was thinking of when I mentioned the "Toy".

Thanks for the explanation!

Kerry Burton said:
Or, as seen here ... a crank (meaning me

Toy made from scraps circa 2000. Picture taken 10 minutes ago.
Click to expand...

Thanks for the picture.

I think I understand how it works now.

-The router would be where the handle is (with a block under the trammel the same height as the center block)
-If I undestand correctly, you would use 2 holes in the circle jig and put pins in them so that they rotate, one in each of the dovetail blocks.
-As the router (handle) is turned one dovetail block is held in place and the other slides from one end of the track to the other. When it gets to the end of the track it will be held in place and the other block will be pulled in the track perpendicular to the first track... creating an elisple where the router is cutting.

If I undertand this correctly you never have to move the blocks by hand once it is set up. Moving the router (handle) takes care of moving the blocks for you.

I'd say you got it EXACTLY right.

I know that the idea of the circle jig is for it to rotate around a center pin, but based on this design of the elispse cutter it looks like the center block should stay fixed.

Ok, now that I get the concept.... How do you keep the center block attached to the work piece for the cut?

Sean Wright said:
Ok, now that I get the concept.... How do you keep the center block attached to the work piece for the cut?

Sure - whatever works best for the piece. The first time you do this will make one time more than I have done it, so a word from someone with actual experience would be good. But I think you're on the right track.

[Later ...] I should have reviewed the Popular Woodworking page again.


Jim Stuard for Popular Woodworking said:
Add rubber feet on the bottom of the jig to keep it from moving while in use.
Click to expand...

Of course, their particular jig is just intended for DRAWING an ellipse with a pencil. If it were me, hooking up a router instead of a pencil, I'd probably go the double-stick tape route.
Last edited: May 11, 2007
You must log in or register to reply here.
Share:
Facebook Twitter Reddit Pinterest Tumblr WhatsApp Email Link
Menu
Log in
Register
Top