How often do I use my ladder?

Actually, not very often. Largely because of my philosophy that old men and ladders are a bad mix.
I believe my ER Doc son would agree. And, I have seen many friends who ended up with very serious injuries for using ladders when the shouldn't have.

I agree, anything over 2 steps I call the neighbor kid over.

I am convinced the only safe way to go up a ladder is to lean it at the correct angle, stake it at the bottom, tie it off at the top, and get someone else to go up it.
R

Sell it and put money into black powder far more useful and safer for u.

Sent from my SGH-I337M using Tapatalk

One of the ladders at our previous house went unused for so long that birds built a nest on one of the rungs. Once that happened, that ladder stayed in place for several years until I could remove the nest in the off season.

I still use ladders, but it's out of necessity, not desire.

I did get one of those Little Giants ladders a while back off of Craig's list. Twenty cents on the dollar. Can't lose money on that deal. Got the extendable ramp as well.

Thought I'd need it for the house build.

the only time I hurt myself with a ladder was 2o years, I was standing on bottom step peeling off wall paper and I stepped down and the carpet underneath balled up and I tripped backwards and severely twisted my ankle.
My kids walked in from school around the same time and found me laying there like a beached whale.

Ive been lucky, I use ladders constantly, and I have a damaged nerve in my left foot, should not be on ladders, but with my children gone, I find I need to get on ladders a lot, Im just very very very careful. I don't do any daredevil stunts on them.
I have a little giant ladder, but feel the flat steps on my 30 year step ladder are easier to stand on and more secure.
H

I still use ladders, more than I want to. I usually find a way to secure them pretty solidly like strapping a stepladder down to my large flat trailer. The only way the ladder was going over was if trailer and all did. A couple thousand pounds of trailer and I felt pretty secure.

I have a limb in the front yard as a reminder not to trim trees from a ladder, not large limbs anyway. Lot's of youtube video to show this isn't a bright move but the limb in the front yard is a fine illustration too. It is a long limb and broke near the crotch, right where someone would be trimming it from a ladder. It is an eight or ten inch limb, maybe twenty to twenty five feet long, and every bit of it is on the opposite side of the tree trunk from the side the limb was on. The end of the limb hit ground before the big end at the crotch broke free and then despite being dead springboarded the entire limb twenty feet or so. Had a climber or ladder been in the way . . . .

I had just turned eighteen and gotten a job hanging insulation and sheet metal in a petro-chem plant. I was out on a permit and union construction pay was nine and a nickel an hour, I was in tall cotton! There was a pipe rack sixty feet in the air and an old wooden extension ladder to get up into the rack. It was angled up pretty steeply to reach and had a lot of movement to it the first time I went up. I wired the top very solidly to the steel I-beam it was leaning against and went on about my business. I headed up the ladder a little too fast a couple times and had to stop climbing and hang on for dear life about the time I got midway. The ladder started flexing back and forth and was moving six feet or more total. Few fair rides offered such a thrill!

I was proceeding up the ladder rather cautiously after eating lunch one day. I had a few things in one hand and you needed two hands when that ladder went to bucking. My foreman saw me and told me to get on up the ladder, added a few frills and flourishes to his instructions! I didn't say a thing. Next day he was trying to holler up from the ground to tell me something but I couldn't hear him. Not being the patient sort he sailed up the ladder. It did the rodeo horse thing with him about halfway up and he locked on until the ladder settled down, completely down dead still. When he climbed up to me I just looked at him and commented, "it gets a little whippy about halfway up or a little more if you get in too big of a hurry." I didn't get any more foolishness about taking too long going up the ladder after that. The wooden ladders were outlawed not too long afterwards. The aluminum and fiberglass ones could get a little interesting but they never compared to that old worn out wooden ladder. I heard that some of the old wooden extension ladders were as long as 120 feet. I think if I had to climb one of them and it even halfway compared to the ride that the sixty footer gave me I would have drawn my time.

I bought a small version of this Little Giant "Safety Step" ladder for the house, and liked it so much that I got the bigger on (4 step, like the picture) for the shop. The steps are nice and wide, and the 'belly bar' makes it much safer to stand on the top step. The 4-step version gets you about as high as you're supposed to go on a regular 6 foot step ladder. 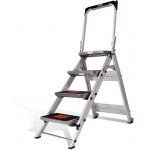 I dont care for heights myself. Only ladder ive actually felt comfortable on is similar to the one Jim posted, but a platform ladder... http://www.homedepot.com/p/Werner-4...gclid=CM30jfbAkMYCFZWHaQod7pYAZA&gclsrc=aw.ds

I made a major mistake working off the ladder yesterday. Crisis time, the tree limbs had blocked my satellite and I had no internet. Of course the limbs that needed trimming were up high, some in very leafy sawtooth(chinese) oak trees. Everything went well at first but with three trees planted fairly close together it was difficult to see intertwining limbs in all the leaves. I had used an old trick of strapping my ten foot step ladder in the bed of my truck with a heavy cargo strap. Strapping the ladder to the truck or trailer makes it very stable and of course easy to move besides adding a couple feet to safe working height.

I had been working a couple hours when I cut a limb that probably weighed 125-150 pounds with the leaf load it was carrying. It tangled in limbs from another tree and somehow came back at me. The roughly four inch butt of the limb came straight towards me and passed within less than a foot of the ladder. Had it hit me it would have peeled me off the ladder at the least. I remembered I had already seen too many video's like that on youtube. I was mostly gilding the lily with what I was cutting now anyway so I decided I had trimmed all of the limbs I was going to.

Always tie them off. My story is trimming a long green six inch diameter mapel limb. Having learned from the Coyote, I did have my extension ladder on the correct side of the cut being made. My feet are about 7 feet off the ground. As the sawzall neared the end of the cut. (And the roadrunner approaching the dish of Acme bird seed below) the limb dropped off with a snap and my side of the limb relaxed upward about 18 inches. Enough to clear the top of my ladder. I dropped the saw and started climbing down not nearly fast enough! I did make it to about the third rung from the bottom before impact. Saddly no video to share.

I still need them for changing the yard light from time to time and putting up the xmas wreaths on the house, other than that I can usually get by without one at my height. I do have a couple of those folding platforms that work great when I'm doing trim work around a room, just have to be careful with your next step is all.