How to restore this old vise....if at all?

I found this old vise at a garage sale about 4 years ago for $5 and it has just been sitting on the floor of my garage ever since. I got it out tonight to see what it might take to make it useable again. Plenty of surface rust on it and no handle. I have no idea of it's age but I don't think it is a real valuable antique. Probable worth more than the $5 I paid though. I'm unsure if I should just wipe it off and leave the patina or do a full scrub and grinding down to the metal.
It says it's from the Abernathy Vise and Tool Company Chicago Ill. No70. Roller Nut Rapid Acting Screw Vise. Then it has the letters (TAPPD FO). I don't know what that means. Where the handle goes it has the number 70A. Also on the front face it looks like there is some kind of insert (dog maybe). It does not move so I'm unsure of it as well.
So use as is or grind it down clean? 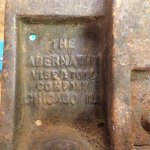 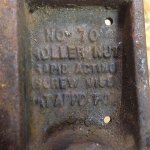 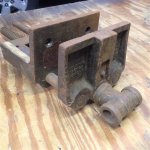 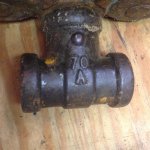 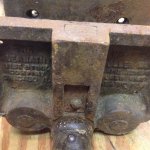 
Sent from my iPad using Tapatalk

Doesn't look like its in to bad of shape to me. Put a little penetrating oil on the dog and see if it comes loose. The real kicker will be if the in and out action is good and you can get that rolling cleanly - I'm betting it won't be to bad.

The only reference I can find to a valuation is as part of a complete bench that listed for a rather astonishing price of $3,400 (https://www.industrialartifacts.net...work-bench-table-vise-clamp?variant=955594881) and it doesn't look to me like they went overboard on preserving the patina on that either (indeed it looks a bit over polished).

I guess based on that it depends on how you want it to look. I probably wouldn't bother sanding back, you could either vinegar or evaporust it (either will leave a bit of a black patina) and they either scrub and paint or just wax it depending on how you like it.

What Ryan said. Work on getting it working. Then think about aesthetics. I think you have a gem here.

Yup, What Ryan said, shoot it with some liquid wrench penetration oil and let it sit for a day or two, should loosen up nicely. I'd probably try opening it up a little, then hit it with a little more fluid then try working it back and forth in short movements and repeating until you get full movement.

If it were mine I would do my best to clean up the surfaces and spray paint it with mu choice of color.

As to the "stuck". Use generous amounts of penetrating oil and a large pipe that just fits in the "T" hole. GENTLY, move in one direction with the pipe and a noticeable but not breaking force. Then go back in the opposite direction. Back and forth - back and forth. You should start to feel a little movement after a while. Use generous amounts of penetrating fluid and plenty of elbow grease and patience. Don't get overly aggressive and break something. Remember - a vice can take some significant force, but is still breakable.

For cleaning - do you have access to a sand blaster? Can you go to a local vocational school and have them sand blast it? You could use vinegar and a small wire brush, or navel jelly.

Definitely worth saving and using. What Ryan said. Loosen up, make a handle and use. I would get rid of surface rust but would clean the jaw faces well. Other than that, use will preserve. Enjoy.

Well....I started to get it cleaned up tonight only to realize now that the "nut" from the underside is missing. Not knowing anything about this vise I didn't even realize there should have been one.

I'll have to search the internet and see if I can find one once I know for sure what it is. It is cleaning up nicely though. The "dog" was rusted shut pretty tight but finally got it to open after about 2 hours of working on it. I hope I can find the part to make this useable again.

Here's the patent (or what I think may be the patent anyway..) - it might be helpful in deducing how the "Roller Nut" part worked.. It seems to be some variant of the "reverse is release" mechanism that's available on some modern vises.. My guess is that finding a drop in piece might be pretty difficult but who knows, you might be able to fashion something depending on the thread... Here's hoping!

Location
outside of Toronto, Ont

Good to hear that you got it moving Tom. The mention of the rust reminded me of a guy who grew up on a farm saying that when his father wanted to restore a rusted cultivator, he threw it into the bottom of a pond for maybe a week. When he hauled it out, the nuts and bolts came part as if they were new. No idea how that worked.
A

Did you ever get this vise working? I just found one in the same state -- a 70D also missing the locking nut. I found on the web where someone said they had such a vise in the same condition and tried the nut from a Jorgenson and it fit in and worked, so presumably Jorgenson bought the Abernathy patent. Unfortunately Jorgenson is also recently gone.

Anyway, it appears to be a 1"-4 TPI acme thread, and McMaster-Carr sells that size nut for $6.65. If I mounted one of those inside, it would no longer be quick release. But cutting one in half and mounting it as is shown in this video might work: https://www.youtube.com/watch?v=WtImjYDGq1k&t=337s

Alan Schwabacher said:
Did you ever get this vise working? I just found one in the same state -- a 70D also missing the locking nut. I found on the web where someone said they had such a vise in the same condition and tried the nut from a Jorgenson and it fit in and worked, so presumably Jorgenson bought the Abernathy patent. Unfortunately Jorgenson is also recently gone.

Anyway, it appears to be a 1"-4 TPI acme thread, and McMaster-Carr sells that size nut for $6.65. If I mounted one of those inside, it would no longer be quick release. But cutting one in half and mounting it as is shown in this video might work: https://www.youtube.com/watch?v=WtImjYDGq1k&t=337s
Click to expand...

Hi Alan, no I did not but funny thing is that I got all the parts out and was looking it over again just last night. I really would like to get this vise to work as I’m hoping to build a new workbench this summer. I too have thought of just welding a new nut to the inside but like you said that would eliminate the quick release feature. I will have to look into it further. Please keep me posted on any progress you make with yours.

I thought pic would be useful as it shows the underside.
A

Thanks for the link. The view of the nut from the bottom is helpful.

I made a mistake above, as the threads are not 1" 4 TPI but double start 1" 2 TPI -- harder to find. That is fast enough that quick release is not as important, but I'd still prefer to make it work.
T

Tom or Alan, did either of you find a solution to the missing nut? I have one in the same condition and I would like to get it working. Even if is just a regular nut, I would like to be able to get this old vise working again.

I did not. I ended up buying a new vise for my bench.