I recently purchased a used Mastercraft 12 inch mini Lathe. I tried it out finally yesterday and it was working fine.

I finished a first tst piece and added anothr piece of wood to practice on. When I turned the lathe on it blew the 15 amp breaker. I unplugged another item and tried to turn it on again. It blew the breaker again. I unplugged he lathe and reset the lathe using the reset button. I plugged it back in and turned it on. The breaker didn’t blow but now the lathe will not run.

Would the problem be the switch now or the reset button or the variable speed switch.

The switch has four poles on it and i am going to try and test it today but not sure how to do it??

Well the short answer is just that.. there's a short or overload somewhere. Determining where and what is definitely the hard part. That lathe is only supposed to draw 3a or 4a so something is definitely wrong.

I would start with a continuity tester and start working back from the switch and reset switch towards the motor. It could be there's a problem inside the motor windings which is way above my pay grade, but I'd bet on it being somewhere in the switch/reset/variable speed area.

The other thing to look for is something seized, the motor could be overloaded if the reeves is stuck or something else is wedged. I guess I'd pull all of the belts off and start testing from the switch in towards the motor to make sure that all seemed ok.. and then turn it on with no load... and work out from there if that works.

The fact that it won't turn on after hitting reset makes me think it may have blown something (another fuse?) around that spot or maybe the windings let go which would be pretty terminal for the motor (you can test the windings i.e. which is mostly a "is this thing busted or not" for most of us - yeah there are people who can re-wind motors, I'm not one of them hah).

I found the manual but it was remarkably unhelpful regards wiring. 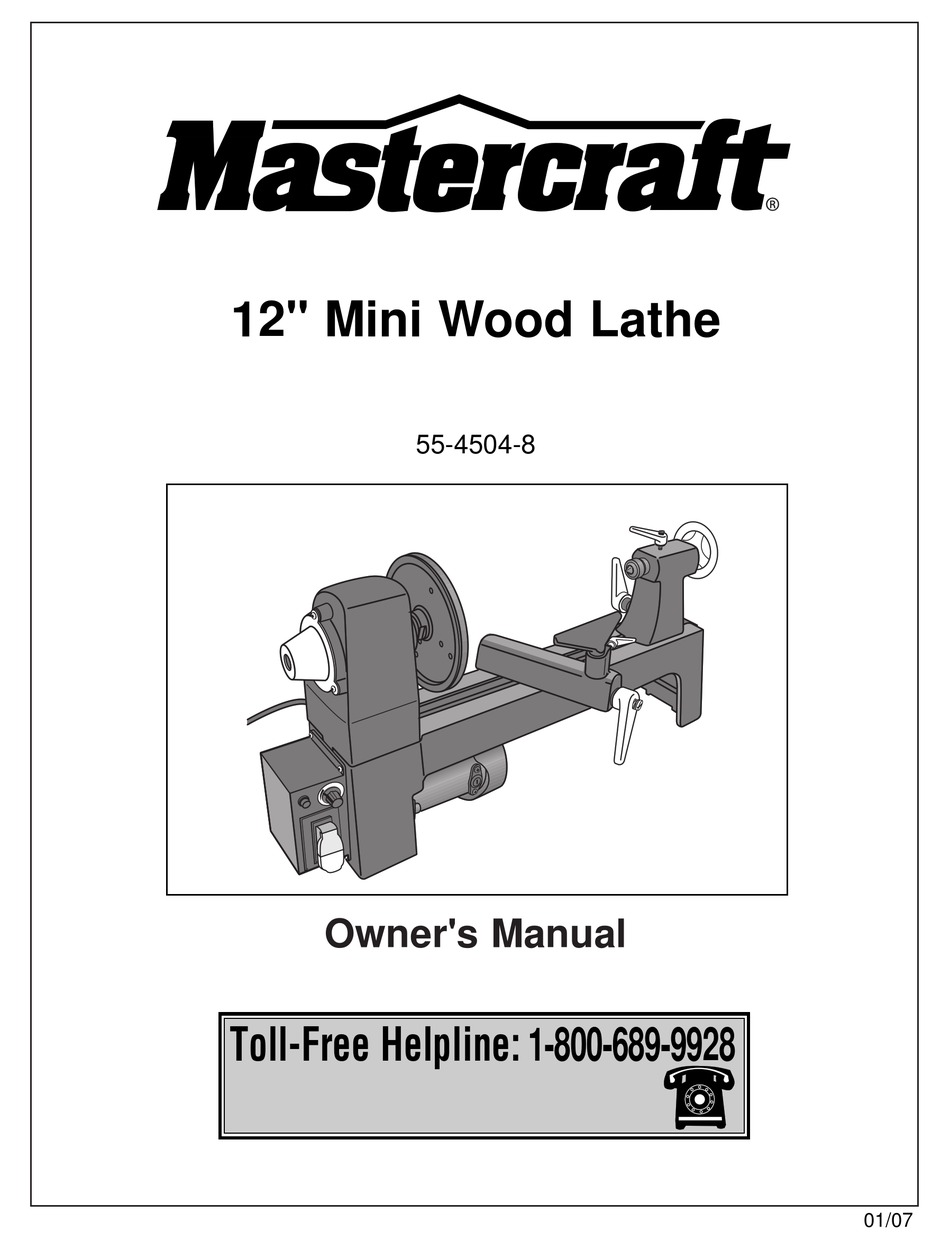 Well the saga continues. I took the same type of switch off of my Mastercraft Planer and attached it to the lathe and nothing happened?? It didn’t blow the breaker so I am thinking there might be an issue with Lathe now. I checked the Pulley and everything seems to be turning properly by hand.

I then put the switch back on my planer and tried to run it and it blew the breaker. I have never had an issue running my planer in the shop.

So I am thinking it is a circuit problem in my wiring in the workshop\shed. I tried switching around the two 15 amp breakers in the box and it still blew the one out so I don’t think it is a faulty breaker??

I guess I will have to find an electrician to figure it out.

It could be something bad with the shop wall wiring... This kind of thing is pretty tricky to resolve remotely without doing 200 questions unfortunately.

I have a hard time figuring how moving the switch over and back would have made the switch bad, so it does sound like something else is going on.

Looking forward to seeing if you can figure out a resolution.
D

Here is the type of switch. Am I reading it right where it says it draws 16 amps??

In electrical circuits the main side effect of resistance is heat, so if the load (amps drawn) goes up there's more heat and eventually something (the switch, the motor coils, the wiring, etc.. basically what ever is the "weakest link") burns up or ideally some safety that detects the excess load (a break, fuse, etc..) and trips before any real damage is done.

The load is either from the motor or if there is something else in the machine/circuit that's causing a dead short. So for instance if you just tied hot and neutral together you have a dead short and the load will increase until either the wiring smokes or the breaker pops (the breaker is supposed to be sized to prevent the wire smoking.. wiring smoking is bad especially if it happens inside the wall, etc..).

The actual load a motor draws depends on the resistance the motor experiences. A motor with "no load", won't draw much power (there's some effort required to spin the bearings, etc..) but a motor doing work will draw more load. Again if you put more force resistance on the motor than it's capable of overcoming, something will have to give and either the circuit trips or you let out some magic smoke somewhere. This is why I was wondering about something being seized in the machine as one possibility.

So in this case if the motor had a dead short, and pulled over 16a in theory it could have burned out something in the switch. In practice since there is usually a fair bit of overhead engineered into such things and your breaker was 15a I'd expect the breaker to have blown before the switch cooked itself. The key word here is "expected" though because if the breaker was slow to blow or .. other problems in the wiring (waves hands) it's still theoretically possible.

So in short (heh) I'd expect this to be a safe switch to use on a 15a circuit like you were, and is pretty reasonable for a machine that's only supposed to draw around 4a.
W

Dave Hall said:
Here is the type of switch. Am I reading it right where it says it draws 16 amps??

16 amp rating simply means the switch can handle up to 16 amps going through it. (Ryan beat me to it!)

Thanks Don, Unfortunately That is all greek to me. What I did try was to run an extention cord from the house to my shop and plugged in my planer. It wouldn’t start. It did throw the reset button so I may have not wired the old switch back in properly . I know I had power in the extention cord because my router table worked when I plugged it into the Extention cord.

Dave you need to call an electrician.

I agree completely on calling an electrician. The planer on the extension cord, to long of cord/to small diameter wire could be reasons for the planer not starting. But, there are some problems somewhere. As expensive as electricians are, they are MUCH cheaper than a shop fire/shop loss.
You must log in or register to reply here.
Share:
Facebook Twitter Reddit Pinterest Tumblr WhatsApp Email Share Link
Menu
Log in
Register
Top