My Version of the Nosy/Whiny Neighbor

We try to keep the peace with our neighbors and help each other out when the need arises. All garden surplus goes to the neighbors. I walk the street (nice and quiet with no thru traffic) a few times a week to get my 5 miles/10,000 steps in and stop and chat with folks. A guy down at the end of one of the cul de sacs sells firewood and always has a stack of logs in his front yard. I spotted some nice cherry in the pile yesterday and he offered me a deal. One of the other neighbors has a beautiful Fuyu persimmon in his front yard loaded with fruit and I stopped to see if he would part with some and found out that his wife is Korean and loves the fruit. We got to compared notes on kimchi and kkakdugi since I just made a big batch of each.

The most common problem is barking or loose dogs. A retired county sheriff keeps a kennel of coon dogs on a lot adjacent to our street and for years they have raised heck at the slightest thing, day or night. The nearest neighbors have filed multiple noise complaints and the county has done nothing. Being a retired sheriff has its perks.

There are 53 houses on our street and a lot of us are retired. As the retired folks downsize or move to Florida some of the new residents bring problems. One of the new couples (both military) had an agressive dog that got loose every other day and would wander the neighborhood growling at people. The nearest neighbors have coordinated and flooded animal control with multiple complaints over a several month period with visits/warnings by animal control to no avail. He chased my daughter as she was getting into her car recently and scared the heck out of me one night when I was taking out the garbage. Last week the animal control team paid yet another visit and there was a big hubbub in the front yard with a lot of bad and insulting words said loudly by the owner, who said he had had enough and picked the dog up and put it into the animal control truck himself. Told them to keep the dog.

Dave Hoskins said:
You're being too nice, Vaughn. When we first moved into this house, our neighbors were kinda noisy. As we got to meet a couple of them, and I mentioned I was a retired Marine, things got a bit quieter. Hmmmm.
Click to expand...

If this neighbor knew I was a firearms instructor (oh my!) and had guns (gasp!) in the house she'd probably have a hemorrhage on the spot.

I'm fortunate enough to live in the country... closest number lives above me on the hill, but is about 1000 yards away... only noise they make is when grandkids are over I hear them playing in the yard - if I'm outside... and their tractors moving up and down the driveway.Next closest is across the road and again about 1000 yards and only noise I ever hear from his is his lawnmower occasionally and his tractor going down the road to a pasture somewhere..... we have two neighbors that sit across the road from each other and are about 1/4 mile away. One house is obscured by the woods between us so only see them if passing their house going into towns north of us.... their neighbor across the street we call "Andy Oakley" 'cause he likes to shot on the weekends... he's lived there about a year and half or so and I would assume he's shot up about $10,000 of ammo so far.... before him, a nephew of my neighbor that lives above me on the hill had they house (before it burned and "Andy Oakley" moved a new one in.... the nephew was part of a band and they mostly made up for talent with volume.
Speaking of which, when I was living in Foster City, CA back in the early 70s... our neighbor on one side was a Samoan family that had 11 adults in a 4 bedroom house... one of the sons and his wife evidently slept in the family room one our side of the house and we heard most of their fights and his attempt at being a musician... our house sat 5 feet from the fence line on our side and theirs was 5 feet away on the other side.... they could vibrate our walls with their "music" until I complained to the father and one day he told me when his son was out of town, he (the father) sold all his music instruments... guess he didn't appreciate "music" either.

We moved from there to another part of Foster City into a town house complex... discovered our neighbor there was a fence, received stolen good at all hours of the day and night. Also found out the police were watching him trying to catch him in the act.

Vaughn McMillan said:
If this neighbor knew I was a firearms instructor (oh my!) and had guns (gasp!) in the house she'd probably have a hemorrhage on the spot.

A new member came to my writers group today. By way of introduction he mentioned how hard it was buying a house where he knew his neighbors did not have firearms. He is afraid people with firearms in the house cannot be trusted. I didn't debate. He probably would have fainted or run away if he learned I was carrying concealed.

Frank Fusco said:
A new member came to my writers group today. By way of introduction he mentioned how hard it was buying a house where he knew his neighbors did not have firearms. He is afraid people with firearms in the house cannot be trusted. I didn't debate. He probably would have fainted or run away if he learned I was carrying concealed.
Click to expand...

I don't own guns and have no need for them, but if you do, it's fine with me. I'm not bothered if people have guns and more people do than I know I'm sure... only ones that worry me are the ones that want to wave them about and/or brag about them... My close friend here locally has a safe full of guns and he's shown me most of them... but they stay locked up unless he's planning to go to a gun range. He's also an ex-police colonel that ran a county jail system... I grew up with guns in the house, my dad had a few and I even used to take his .22 strapped across the handlebars of my bicycle out to a friends house and we would shoot... back then I could walk into the local 5 & dime and buy a box of 50 .22 long rifles for about $1....
I also remember I got the seat of my pants warmed when I was about 10... Dad kept a 12 gauge single shot standing in the closet of his and mom's bedroom... I got into the closet, took the gun and broke it open, only I also broke the thumb lever that opened the breech... I only touched it once though.

Last time I remember firing a gun was in the navy... the gunners mate learned that I wasn't qualified with a hand gun and as a second class petty officer I think I might have been supposed to have been.... he got a .45 from the armory, took me to the fan tail and handed me the pistol with instructions to shoot at a weather balloon that had just been launched... said not to worry the .45 would not penetrate.... I pointed and shot, don't know if I was anywhere near hitting the balloon, but I'm pretty certain I hit the pacific ocean dead on.

I was at the museum market place a day or so back and the manager had a plumber in trying to seal off a drain or something that was putting a sewer smell in the museum and the marketplace... he had either a .45 or a Glock on his hip.... figured if he couldn't kill the smell legally, he would just shoot it.

Each to his own. The first gun I ever owned was an old (even at that time) single shot .22 I bought at an antique shop when I was about seven or eight years old. It was about 30 miles from my home. I got there walking and hitchhiking. Bought the rifle for $3.00 then went back the same way. No problems. Today, a seven year old seen walking along the highway with a rifle would bring out CNN, Swat teams and black helicopters. Things have changed.

Location
Outside the beltway

Vaughn, I prefer leaf blowers, mowers, chain saws, gas power washers and the HD of course listing to loud tunes.
But that was when "Sue" lived next door. She's gone now.

I think there are several of us who need one of these. It's the "Get Off My Lawn" edition. 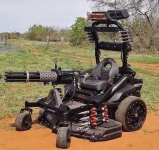 Vaughn McMillan said:
I think there are several of us who need one of these. It's the "Get Off My Lawn" edition.
Click to expand...

I've got three neighbors within rock throwing distance. One is a guy who I guess works from home. He comes and goes about once a day and stays inside for the other 23.5 hours... Two is a 90 yr old Army Vet who has become my surrogate Dad... We get along fine. Three is a couple who are County Deputies... They have two obnoxious dogs and two equally obnoxious roosters. The Aussie barks incessantly when he is outside and the Chihuahua comes across the yard to bark at us when we are inside our house... both dogs are a bit gun shy and will stop barking if I am doing a little target practice... But, they mostly try to keep them quiet. I take them veggies and they give us eggs so it's a tradeoff. The rest of my neighbors are cows. They don't bother much and keep to themselves...

Before we moved, we did have a somewhat annoying neighbor but at least she liked us... She was a widow, the lady across the street was a divorcee, and between the two of them Nothing, and I mean NOTHING happened on that street that they didn't know about or see. Best security system I ever had!

Vaughn McMillan said:
I think there are several of us who need one of these. It's the "Get Off My Lawn" edition.

Alan R McDaniel Jr said:
...The rest of my neighbors are cows...
Click to expand...

I can walk down to the fence and call them big old fat cows and they just swish their tails, sling a string of slobber over their backs and look at me like I've got range cubes in my pocket...