new home for the laser set up

Ryan Mooney said:
And a backup strategy.. Just after recovering ALMOST all of a friends critical files from a failing computer.
Click to expand...

you're a good friend, to help with that.

sorted out all of the files from the desktop, loaded onto the new drive, didn't make much of a dent. started with 1.81tb, finished with 1.81tb....
now, its check the laptop.

one of the last things started for the end of this season. since my wife

was nice enough to buy me a bigger laser, i guess it was finally time to get it set up on the bench. first thing was to clear the deck, and get the bigger bits of mdf secured to the bench. then, positioned the frame for the laser (only needing to swap parts over from the old laser), scooted the file cabinets over to one side, and tucked in the computer. after that, setting up the layout for the monitor, trackball, and keyboard. this is all i had time for today (cleaning up the garage, and machines for the winter).

got some more work done on this today. swapped out the motors for the ones that i had on the old machine. electrical hook ups are a bit better. 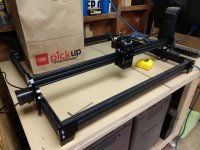 did some more work on it yesterday. wound up replacing the old stepper motors for newer ones, and realized something was odd. the new motor have 6 pins, and the new wiring has 4 pins. needless to say, i was not happy. then started to think about where i could get adapters, and had an idea. i checked the wiring that came with the original set up, and sure enough, one end was female 6 pin, and male 4 pin on the other, problem solved! i did have to talk with the jtech people, as the new controller has x, y, z ports, and an a port. also, with these 4 strand, flat cables, not going to be easy swapping around one of the y motors. easy fix they said, the a port is already set up to be the opposite spinning y motor port, and just to insert the cable just opposite of the labelled y port. with all that done, the motors are swapped and wired up, the other electrical is done (just have to call them and see if i can buy the input cable from the controller (can't find it), and set up the belts. then keep my fingers crossed, and power it up, and see if it works. also, just have to get some half inch steel, to hot glue onto the z axis, for the magnetic mount to latch onto. 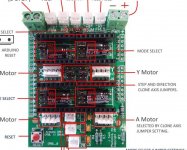 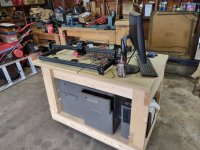 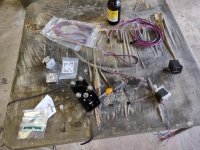 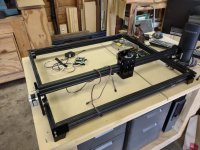 got back to it again yesterday. then went with pop to sam's club for some stuff. started raining when we got back. i was getting ready to start again when i heard something heavier hitting the garage roof.... 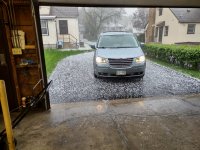 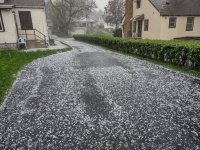 Hail, Hail, the gangs all here.

Dan Noren said:
i wound up with one of the last dell precision t1700's being thrown out at work.
Click to expand...

This is where all my personal machines came from until I retired . Looks like a nice solid work area.

so close to finished, it isn't funny! wound up talking with tech support at jtech (had to do some minor surgery on a power supply). the motors run, the laser fires (on command even!), and all that is left, is to secure the belts. had the pullies on backwards, and had to reverse that (silly things line up with the wheels). after getting stuff straightened out, took two bits of heavy duty double sided tape to attach the metal plate to the z axis, then you can see the minor surgery on the power supply. in talking with tech support, there was no need to grind down the 2 screws that stuck out (they are just used to locate the laser to the mount, and could be removed. had to take the laser apart, but what the heck. this is how it looks, cleaned up, and with the laser in it's place. 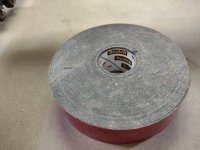 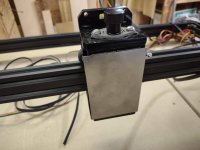 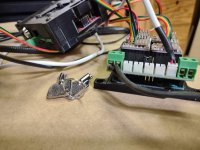 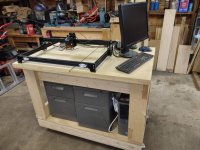 got the belts on, and it was acting odd. was on the phone with the tech guy, and wound up sending the controller, and the motors to him, so he can set it to rights. should have been easy peasy, but once again, bit on the but. oh well, at least the laser fires on command.

talked with the tech guy yesterday. turns out the controller that i bought from them a year ago for this, was way out of spec. that was why the y axis motors were getting too much power, and that is why they were getting hot. also, it looks like a cable problem as well. he had the motors running for a few hours, after resetting the controller back to spec, and the motors ran just fine, only getting a touch warm as expected. so, controller reset, motors ok, new cables, and belts (had to cut the old ones), are due to arrive on monday. a couple of hours to replace, and test, should be good to go.

oh kids! this is taking a whole new twist. they sent the package back on the 2nd, with expected delivery on the 6th. didn't show up. usps update said yesterday, that it was still in the system to be delivered. the last it was scanned, was on the 2nd, at the north houston regional facility. spoke with the post office this morning, as the latest update says that it will be delivered later than expected, but it is still in the system to be delivered. they tried telling me that the label did not have my street address on it. so it may be in some lost and found, or some such. called jtech, they reprinted the label from the 2nd, and lo and behold, there was my street address. they said if the package can't be found, they will pack up new stuff, and send via ups. local post office called, with pretty much the same info, not knowing where my package is, it could be 1-3 days before it could be found, and who knows how long to be delivered if/when it is found. trust me, when i was done with him, he was crying, and wishing his grandparents hadn't met. if jetch sends new stuff (no charge to me), all they ask, is if the post office delivers, that i send it to them. i like doing business with them.

the fun finally ended. my package showed up in minnesota this morning, but it was sent to the wrong post office. scanned arriving there at 7 this morning. 11 minutes later, it was scanned as being out for delivery from our post office. then scanned again, 45 minutes later, as having arrived at the wrong post office. called our local one, they said it was an error at the sorting facility in another city. they also said it was still at the wrong office, waiting to be returned to the sorting facility, but, if i called them, they could hold it there, before it got sent out. what a charlie foxtrot...

just when i thought i was in the clear, bit on the bottom again! got all of the motors remounted, belts on nice and tight, and wiring installed. for some reason, unknown to me, again the laser won't fire, and the motors don't run. seems somehow, there is no power to the hardware. calling the techs again in the morning....

Bummer, guessing if you have power to the board, then it's probably an estop or limit switch getting triggered.

Couple of hours with the tech and it's running!!! Details later..

well, the reason it wasn't working like it should, is that with lightburn, i will need to reset the machine each time it is started, so that starts clean. then i found out that i had to resize some stuff, and there was another problem. when moving it 4 inches, it would move 5, and we reset the steps for the motors via lightburn, and and we were accurate. ran a couple of tests, and called it a day. now i have to double check things, to make sure everything is ok. 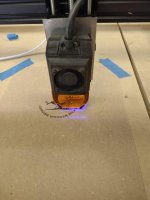 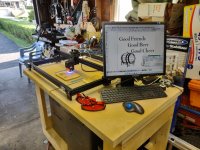