These aren't mine, but I get to use them. Mike and Jeff (my bandmates) split the cost on a pair of new PA speakers, and they arrived yesterday. We've been using a nice pair of passive Yamaha 10" 2-way speakers and a 1500 watt Crown power amp. No complaints, but there's better technology available. We now have a pair of QSC K10 self-powered speakers with 1000 watts of bi-amped power built into each. Now we can do away with the power amp completely and run the mixer directly into the speakers. These two little 32 pound boxes mounted on tripod stands can put out essentially the same decibels of sound, and cleaner, than the 500 - 600 pound PA stacks we lugged around in the '80s. To be fair, these won't have the same amount of throw in an outdoor venue that a traditional PA stack would, but for our needs playing smallish places, they're actually better than something larger. Also not quite as much bass as the 5' tall bass bins we used back then, but with the addition of a modern subwoofer or two this pair could shake some serious windows. They're rated at 129 peak dB, which is way louder than we'd ever dream of being. (That's like "Larry snoring" loud.)


In our case, we're not a loud, bass-heavy dance band, so subwoofers would be pointless. (And using digital signal processing, these little guys put out a lot more bass than you might suspect.) These little guys will just give us a nice step up in audio quality and clarity at any volume. And since Mike and I are not using any guitar amps at all on stage, our guitar sounds gets to benefit from the new PA speakers, too. Looking forward to giving them a test drive at our gig Friday night. 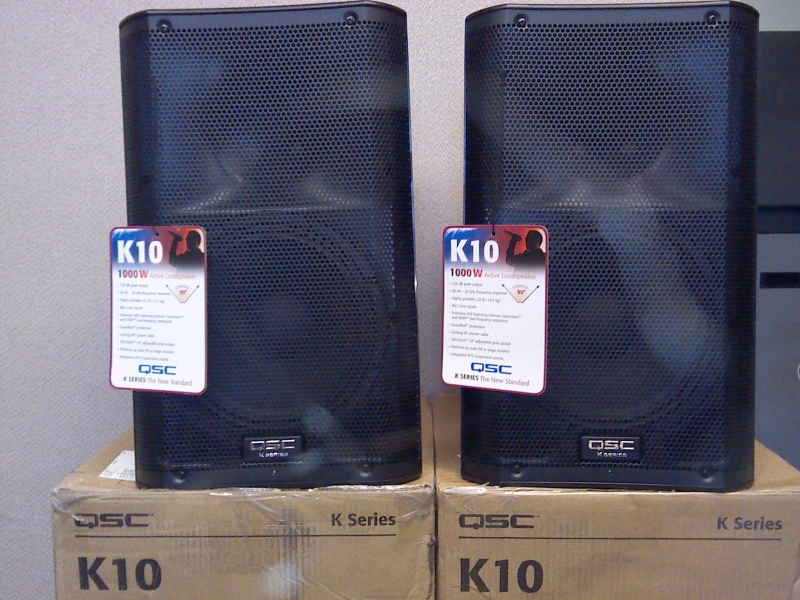 I told the guys I was feeling guilty for not contributing to the new PA, so I'll go buy us a laser light show and a couple of fog machines. That should go over well in a small pub at happy hour, huh?

It is amazing the difference in size anymore. The speakers I've got for our stereo are smaller than what they used to call 'book shelf' speakers. But the 5 of them, along with a subwoofer kick out more than enough sound for any movies in the 'home theater'.

Just wish I could get the opportunity to see you guys play live one day!

Vaughn McMillan said:
I told the guys I was feeling guilty for not contributing to the new PA, so I'll go buy us a laser light show and a couple of fog machines. That should go over well in a small pub at happy hour, huh?

As long as you play some Jefferson Airplane, Quicksilver Messenger Service, Boldwyn Pig and some Colloseum . . everything will be fine.

glenn bradley said:
As long as you play some Jefferson Airplane, Quicksilver Messenger Service, Boldwyn Pig and some Colloseum . . everything will be fine.
Click to expand...

None of those, but we do have a few Pink Floyd, Beatles, ELP, and Jethro Tull tunes on the list.

Brent, you and Sharon just need to come visit your SIL. ;-) We DO have airline service here. (You'd spend more time in the airports than in the air.)

I still say you need a big amp stack backdrop printed up to hang on the back of the stage, maybe like this one...

Nice. Smaller is better when you have to haul stuff around. You'll have to give us a report after the first gig.

Karn evil #9...Hoedown...Brain salad surgery...I'm not picky, post them all

Darren Wright said:
I still say you need a big amp stack backdrop printed up to hang on the back of the stage, maybe like this one...

bet that security dude has his ear plugs in

Remember, this band started out as an acoustic duo. We play From the Beginning.

My old band played Hoedown, though. (I got to sit that one out, since there was no guitar part.)

Darren, that Marshall backdrop looks like it came from a Guitar Center Store. They use pics of Marshall, Mesa, Gibson, and EVH on the guitar wall in my local store.

But they don't have nearly as sharp of security guy as in your photo.
J

The dreaded "Hat"!!! Not the Hat!! I don't think the stack would have helped
R

Oh Vaughn you play my kind of music. :thumbup::thumbup:

That guitar pic would make a good backdrop. Think u gonna need a new security guy otherwise your kit will disapear overnight.

Location
Oceanside, So. Calif. 5 mi. to the ocean

I tried to learn to play an acoustic guitar about 75 years ago. Does that qualify me for this site?