It's getting hard for dad to hold onto playing cards. Between games I went out to where my bandsaw is plugged in and made this out of a scrap of 2x4.

If he behaves himself I'll make him a better one once I have a shop again.

Plus on on saying hi to Jim!

Made my grandfather a card holder years ago, 2x4 with angled cuts, front row deeper than the back row. Canasta hands are quite a few cards. Great on you and yes, please say hi to Jim and tell him I miss his wit and wisdom.

Please give Jim my best regards, too.

I haven't played that game for a hundred years. I wonder if I could get my son interested in that.

Another ditto on a 'Howdy' to your dad!!!

Dave Richards said:
I haven't played that game for a hundred years. I wonder if I could get my son interested in that.
Click to expand...

Heh ... until you mentioned "that game" I hadn't looked closely at the cards. It turns out that I wrote a Turbo Pascal (DOS) version of the game some 30 years ago, called TOUR.

In the first version, I hadn't figured out how to get the computer to play, so the 2 human players had to avert their eyes from the screen when it was the other person's turn. [Lame!]

Then a coworker helped me translate the code to Turbo C and create a "persona" for the computer, named Albert. I eventually added 4 user-selectable "personalities" for Albert, something like:
I also created a version where two computers could be connected with a serial cable, and another version where two computers used a "shared file" on a network drive to play (somewhat) remotely.

All versions had a "Boss" key that would pop up a screen which looked like WordPerfect 4.x for DOS, and a "Help" screen that explained the rules, scoring, etc.

If anyone is interested, I can try to dig up the EXEs from my "archive".

I haven't played that game for a hundred years. I wonder if I could get my son interested in that.
Click to expand...

Whew! I found the EXEs fairly quickly, but it took me a while to create an MS-DOS 6.22 virtual machine and even longer to make the EXE files available to it. Anyway, here's the Welcome screen for the only computer game I ever wrote... 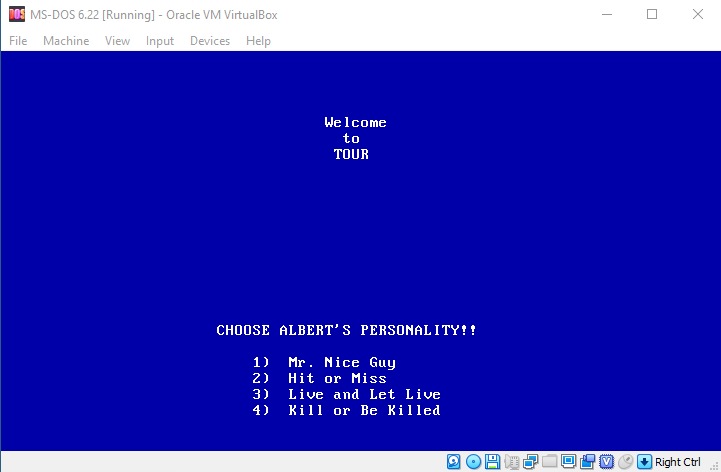 ... and here's a multi-hand game underway: 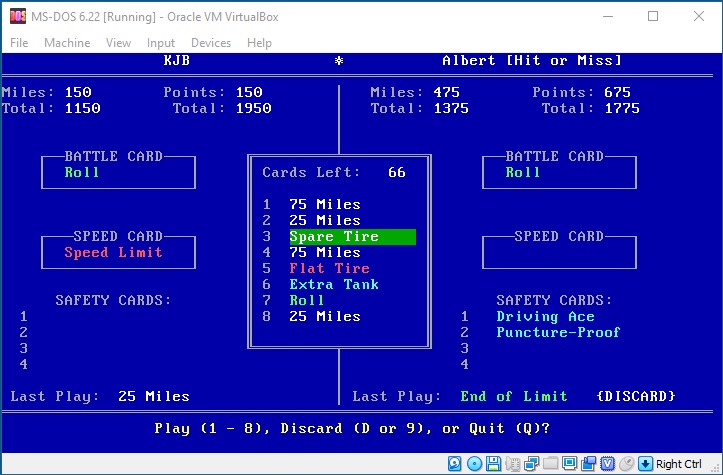 I haven't figured out how to hear the sounds yet, which is too bad ... they really help you know what's going on.


Still, there's nothing like playing the actual card game with another person. Glenn, let your dad know that I wish him a "Right-of-Way" safety card in every game!

Glad to know Jim is playing around, those will be of great help to him. Send him my best wishes. It was a pleasure to meet him during the tour.