Something Many of us Can Relate To

Saw this go by in a luthier group I follow on Facebook and figured a bunch of folks here could relate. Am I right, @glenn bradley ? 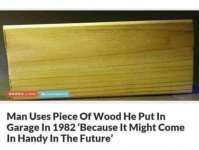 LoL, I love it when I move a bunch of stuff and have one of those “holy cow, I forgot that I even had that!?!” moments.

glenn bradley said:
LoL, I love it when I move a bunch of stuff and have one of those “holy cow, I forgot that I even had that!?!” moments.
Click to expand...

So today I was using a small axe... and it is really quite a nice little axe. I found it in my shed hanging in the place I put axes and where presumably I put it at some point in the past (it was on top of the Pulaski which I remember putting a new handle on and hanging there last year). It has written on it near the head in sharpie "$13.00" so I would presume I paid that, or possibly less, for it at an estate or yard sale at some point. However, I also have exactly zero recollection of ever buying this axe or indeed ever using it before (so presumably it was a somewhat recent purchase as these things go as I do tend to use the axes I have..). But yes, I was quite pleased to find this nice little axe in my collection!

Location
Outside the beltway

I found an ashtray from Tokyo 73 in a box recently

I have wood I moved in the early 90's in my shop I have not touched since then. I guess I should do something with it or not.

Sent from my SM-G960U using Tapatalk

I will have to admit this strikes home for me. I have some quartersawn Douglas fir planks that I bought in 1982 stacked in my shop. I bought them to make a table top for a Parson's table for my parents for a Christmas gift. The entire table was built from fir except for some plywood that served as underlayment for the fir planks. The legs were 4x4's cut down to 3x3 and the side and end rails were 2x4's, I remember jointing those 4x4's and 2x4's on the Shopsmith 10-ER jointer that I had to get them down to the correct size with square corners. The quartersawn fir was screwed to the 3/4" plywood with rows of screws which had to be plugged. I bought a Stanley plug cutter and cut all those plugs (seems like there were over a hundred) glued them in carefully aligning the grain and then chiseled and sanded them flush. I think that was the hardest part of the job.

I built this table using plans that were in a Sunset paperback book entitled Easy To Make Furniture. It was called a Butcher Block Parsons Table. I still have it in my collection and dug it out of the bookshelf this morning because of this discussion. I had not thought about that quartersawn fir in years. I could not find a picture of my original table but I did find this plan picture.

There are only 4 eight foot planks left at this point. If I am not mistaken this wood was milled and sold as flooring material. Over the years I have used a piece now and then for something special. I built a couple of wooden toys from some of the scraps using plans from the Great American Wooden Toy book by Norm Marshall. I used my 1949 vintage Shopsmith 10-ER for that project and for many others. All of those projects were built in my first freestanding shop which was built using plans for a clerestory garden shed that came from Better Homes and Gardens.

Here is a picture of a similar shop. Mine was 16 feet square as that was as large as I was able to obtain 2x12's for support of the clerestory and rafters. My wife and I built this while she was pregnant with my son. Under one of the sole plates we scratched "Built in 1979 by Mike, Gail and ????" in the concrete. Funny how you remember things that you haven't thought about in years. Except for the fact that it was 16 feet square ours was virtually identical. We did paint the T-111 siding barn red and the shop was built on a slab. A few years ago we went to that area for a funeral and took a drive by our old house and the shop was still standing and looked as if it had been well maintained.

It did my heart good to see that shop which I loved just as reminiscing about it and the table I built in it was a good start for this Sunday morning. What good memories some old wood brought to mind. 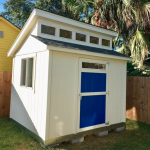 P.S. This quartersawn fir has moved four times over the years to various shops.

Hmmmm. I have a piece of mahogany my dad salvaged from when the front desk in the police headquarters was demoed back in the early 80’s (he was a cop in NJ) But to go one better, I have a piece of chestnut my grandfather stashed away during a minor remodel of his home. He died in 1957.

I have some Honduran Mahogany shorts from the late '70s ...

NAH I don't have any wood stored that is as old as that. Almost, but not quite.

I have some Lignun vitae pieces that my dad salvaged from his job, they used to make ship propellers bearings with it and he kept some scraps not big enough for the meant goal. They must be from 1960. He kept them as if they were gold, not wanting to use them in silly projects. He died without having used them. I took one some years ago and I made a spokeshave I posted here.

Toni Ciuraneta said:
I have some Lignun vitae pieces that my dad salvaged from his job, they used to make ship propellers bearings with it and he kept some scraps not big enough for the meant goal. They must be from 1960. He kept them as if they were gold, not wanting to use them in silly projects. He died without having used them. I took one some years ago and I made a spokeshave I posted here.
Click to expand...

My grandfather was a machinist on a cruiser during WWI. While they were at sea they lost water pressure in the line shaft to one of the propellors and the lignum vitae bearings were damaged. They had to be replaced at sea.

Granddaddy said he and other mechanics spent three days hand carving and sanding those bearings to shape. He said he had never been more nervous in his life because the German U-boats were patrolling the Atlantic just looking for American ships. As I recall he said the bearings were U-shaped and two halves had to be made to create on bearing. I have never seen one but I can imagine carving lignum vitae to that exactness and specifications. I didn't think to ask how they were installed at sea.

Toni Ciuraneta said:
I have some Lignun vitae pieces that my dad salvaged from his job, they used to make ship propellers bearings with it and he kept some scraps not big enough for the meant goal. They must be from 1960. He kept them as if they were gold, not wanting to use them in silly projects. He died without having used them. I took one some years ago and I made a spokeshave I posted here.
Click to expand...