This is barely woodworking so bare with me.

I'm volunteering with the local First Robotics team this year. It's a pretty cool thing and I'd recommend it to anyone. The game this year which is sponsored by Star Wars: Force for Change includes a requirement for the robots to reach up and hook onto a trapeze bar and then pull themselves up off the floor. One of the students designed a hook to be made out of thin sheet metal. The robot would have four of them in two pairs. We've really had a problem with the robot being overweight (Max is 125 lbs and our target is 120 lbs.) and have been looking for ways to cut down on the weight. I was curious about the possibility of making the hooks out of something lighter. The hook he designed, which has the same profile as the one in the photo, weighs almost 5-1/2 ounces so more than a pound for all four of them. I modeled his hook in SketchUp to get the volume andcalculated the weight of a 12mm Baltic birch plywood hook at 1.48 ounces. I made one with the exact same dimensions as the student's metal hook. We could get by with only two of them instead of the four they were planning.

We tested this hook to destruction. A couple of the other mentors, each of whom tip the scales at over 200 lbs. took turns hanging from it. It broke after the fifth or sixth loading. The failure occurred where the plywood is 1/2 in. wide. Overall dimensions are 2-1/2 by 6 inches.

I'm not sure if plywood hooks will get used on the robot. Two of them would certainly be more than strong enough and minor changes to the design could improve the strength but this makes me think that I often over build things in my own shop. I imagine I could get away with considerably less than I usually end up using. 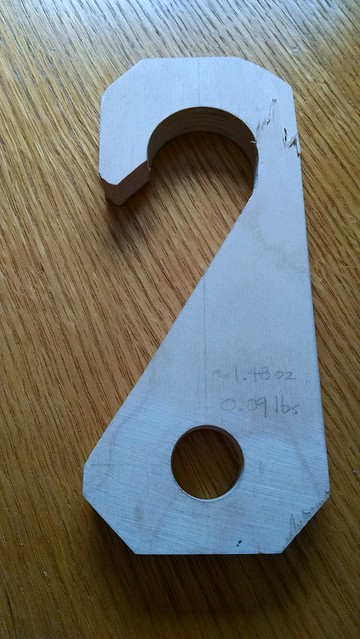 You're not alone, though with the 3d printing I've gotten better about lightening things up, which usually is in the interest of reducing print time.

Oh yeah. 3D printing is a good place for figuring out where you don't need stuff.

I agree, super guilty personally of over building frequently at the expense of both weight and design features. It's a super hard mindset to get over and requires a lot more confidence in materials and methods than a lot of us have (especially with some uncertainty around the material consistency that most of us work with). Testing to destruction is a super fun and interesting way to figure out where things are - even better when you have other folks doing it so there's a larger sample to steal^Wlearn from

I'm thinking a lot of that material could still be removed in the modeled hook as well, at least in the metal version the bottom section could likely be mostly webbing.. Getting the webbing right is, of course the trick.

There's a "new" (well I've only learned about it recently - it's been around for a few years I suspect you might already be familiar) technique called "generative design" - autodesk Fusion 360 has some capability in that regard (The Fusion 360 topology optimization feature is free for the student/educational version). It's a very interesting way to get super strong and light structures by basically using computer aided tension/force analysis to enable the process to remove all of the bits that don't matter. I'm not sure if there are useful by mortals cheap versions - MIT has a brief overview http://fab.cba.mit.edu/classes/865.18/design/generative/index.html It appears https://solidthinking.com/product/inspire/ has a student version. Grasshopper is included in the new Rhino https://www.rhino3d.com/6/new/grasshopper - more "free" (for some value) tools listed here: https://www.bdcnetwork.com/blog/free-generative-design-–-brief-overview-tools-created-grasshopper-community

You could probably also dramatically increase the strength by making a custom laminate paying attention to material and wood grain. The couple things I've tried doing that way have been astonishingly strong (sometimes accidentally discovered by say falling on the object )

Ryan, good idea on the hook and the lamination thing. By the end of the evening I think they decided to go an entirely different route for the hook. I think it's still more complex than it needs to be but I don't have a great deal of say in the matter and the people who are most involved seem to think they are too far in on this to make major changes in the design. No biggie. Interesting to watch, though.

The team has settled on using OnShape for their CAD work. Compared to SketchUp I don't find it at all intuitive and count myself as lucky when I can actually find and open one of their files. I'm not sure if it has any of the generative design capability. I might have to look into it.

Dave Richards said:
The team has settled on using OnShape for their CAD work
Click to expand...

Well working for a cloud org, I have an inherit distrust of cloud based services Probably also a curmudgeon

Looks like it does have some: https://www.onshape.com/cad-blog/partner-spotlight-using-generative-design-with-onshape-and-paramatters
It might be a pretty interesting way to try & reduce weight... I suspect the quality of the generated design is still widely varying between different generation engines.

I prefer desktop client applications myself although I do have to say, for use in a school setting, the cloud based options seem to be workable. Since they run in the browser, it doesn't take a lot of computer to make them work. And in the Robotics setting, a number of kids can be working on the project at the same time in a computer lab or on their own computers at home so the collaboration thing is good.