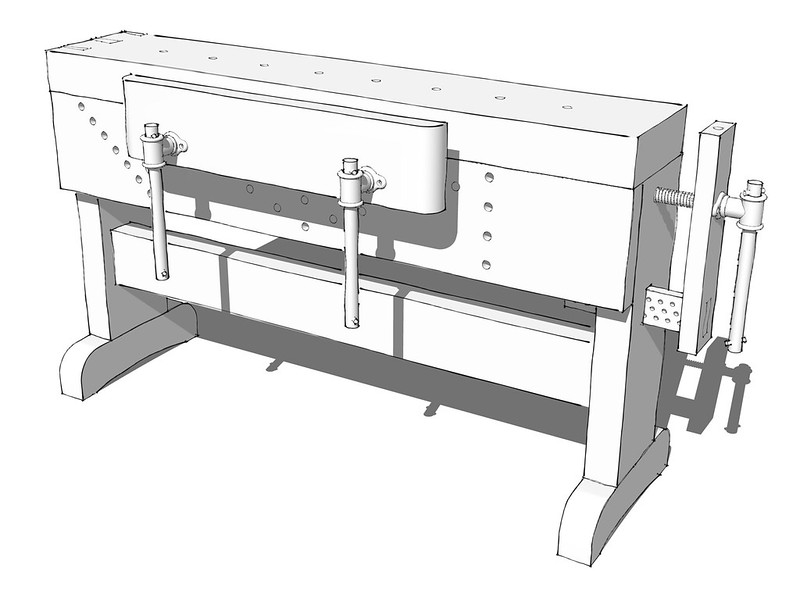 I was rooting around in some stuff and came across an old article about a workbench based on a coffin maker's bench. The author had reduced the length from 13 feet long to only 5. Holes on the apron and top are for hold fasts or dogs. The front vise is designed to be easily removed when it isn't needed.

Getting ready to move so I decided to make a quick model and recycle the paper.

I agree regarding the original one, Brent. I think it could be a useful bench for most anyone doing hand work. And it's a space saver.

That isn't the shape I expected to see when you mention it being a coffin makers bench. Much more narrow, but can see it being useful in a small shop or for specific tasks.

Darren Wright said:
That isn't the shape I expected to see when you mention it being a coffin makers bench.
Click to expand...

Maybe you were expecting it to be narrow on the ends and wider about a third of the way from one end.

Dave Richards said:
Maybe you were expecting it to be narrow on the ends and wider about a third of the way from one end.
Click to expand...

I don't know much about coffins except for the fact that I have helped carry quite a few of them. That bench design is fascinating and even though I have never made a coffin I could see how its design would work.

Probably 15 years ago I was teaching turning at John C. Campbell and the woodworking shop which is housed in its own building had a class on building coffins. During that week only one student was able to complete a coffin. It was a traditional design executed in red oak. I would have been honored to take the long sleep in such a piece of craftmanship. On Saturday after breakfast when everyone was checking out I will never forget seeing that beautiful coffin tied onto the roof of an SUV heading down the mountain. I wondered if the maker was stopped on the way home by a curious law enforcement officer.
You must log in or register to reply here.
Share:
Facebook Twitter Reddit Pinterest Tumblr WhatsApp Email Share Link
Menu
Log in
Register
Top