They aren’t for me; they are for my daughters.

I found plans for this cabinet in the October 2006 issue of Wood magazine:

I think that such a cabinet will be a good Christmas present for each of my daughters, Kathleen and Kristel. They are both married with young children and have small shops in their basements. Kathleen and Kristel both do some woodworking and enjoy it but their husbands are not (yet?) very interested except as a means to an end. A cabinet such as this will be a big help in organizing things (so that I can find them when I am visiting ).

Kristel has enough space for a cabinet as per the plans, whereas I am going to have to reduce the size of the cabinet for Kathleen. I will build Kristel’s with only slight modifications to the plan (I have never built anything exactly to plan but these plans are better than most), then make more changes for the smaller version.

I cut all the parts for the first cabinet this afternoon. Most of the cutting was done in the garage using my guided circular saw system on a temporary “table” that I use for cutting sheet goods. This table uses knock down saw horses supporting a sheet of plywood with foam attached.

Here I am cutting pegboard:

Since I was cutting in the garage with the door wide open, I did not bother to hook up a vacuum to the saw.

Here are all the parts for the first cabinet cut to size:

Looks good Frank, and that is a great Christmas present, one they will enjoy for a lot of years.

Look forward to your updates!

Frank...
Nice gift. You are so good at "mis en place" in the work shop...how are you in the kitchen?

Having spruced up the shop last week (as I talked about in the thread entitled “2nd Annual Shop Clean-Up and Improvement Week”: http://familywoodworking.org/public_html/forums/showthread.php?t=413), I expected to get a lot of time there this week to work on Christmas presents. As they say “the best laid plans …”. On Sunday, Margaret’s computer with a lot of valuable stuff on it would not boot. So this week I have been working on that. It still won’t boot, but I now have the data from it on a new computer that I bought today. While I was spending time in the office doing all this, it became clear that, to keep peace in the family, this week should become “1st annual Office Clean-Up and Improvement Week”. I admit that the place is a mess and, when I am finished, I will be happy that I spent time organizing, repairing, and cleaning things. But, it means that I will get little shop time this week.

Yesterday evening and this early this morning I did get about 4 hours work done on the first tool cabinet.

01) Here are the outside parts for the main cabinet rabbeted, grooved, and ready for dry assembly.

02) And here is the main cabinet assembled.

The plans called for the two more narrow shelves to be adjustable supported by pins drilled into the cabinet sides. I figured, that once the cabinet was filled, it would be very unlikely that one would ever want to move the shelves, so I made them permanent. All joints are glued and screwed with #8 2” flathead screws (Robertson of course).

03) Everything about this cabinet is quite straightforward and things would have gone batter if I had paid more attention. I was rushing and, as a result, had to backtrack and redo three different things. For example, here is a photo of a narrow bin stop being glued to the edge of the bottom shelf:

and here it is being removed with a chisel :

because, it should have been placed part way in on the cabinet bottom.

I had to nail it in this time because I have no clamps with wide enough jaws to reach it’s location.

04) Next, all the sides and tops for all four doors were rabbeted and grooved. This photo shows the side about to have its grooves widened to ¼”.

Each door support two pieces of pegboard, one facing in one facing out. Thus the two grooves.

05) Here one of the doors is being dry assembled:

And that, folks, is as far as I got. Margaret summoned me at that point and I have been spending most of my time since then in the office and the computer store.

The plans for this in Wood magazine are quite good and, on this first unit, I am adhering to them about as closely as I have ever stuck to any plans. I only have on quibble and that is about the cutting diagram. Although Baltic Birch is advocated, the cutting diagram is based upon 4x8 sheet of plywood rather than 5x5 sheets. I am told that is some places it is possible to get baltic Birch is 4x8 sheets, but this is not the norm. An alternative based upon 5x5 sheets should have been provided. Not that I would likely have followed it –I seldom do.
Last edited: Nov 22, 2006
M

Lucky daughters...will have to look at making a cabinet like that for myself someday. Nice gift.
M

Frank, I think that I could use a cabinet something like this in the sewing room. You could take down the pegboard that is over the sewing machine and replace it with a cabinet. There would have to be a built-in light under the cabinet.
J

Margaret Pellow said:
Frank, I think that I could use a cabinet something like this in the sewing room. You could take down the pegboard that is over the sewing machine and replace it with a cabinet. There would have to be a built-in light under the cabinet.
Click to expand...

For a bit of this afternoon and most of this evening, I took some time away from the ‘Office Clean-Up and Improvement’ project (still not finished ) to work on Kristel’s cabinet. The doors are now built and installed. Here are three pictures:

08)Both doors on one side open:

When the above pictures were taken, the hinges were not yet on the two doors on the left side of the cabinet in the picture. They are on now. I still need to apply finish to the wood, install magnetic catches for the doors and make the bins.

For today's simple task of attaching 4 doors to the cabinet with piano hinges, the article in Wood magazine is too complex, advbocating steps using masking tape, double sided tape, and special spacers where none of these are needed. Here is one example of such "overkill":

Well, the office has now been tidied up, so I am back working in the shop today.

09) This morning I installed a cleat on the back of Kristel’s cabinet.

That’s it just below the top piece of plywood. It is cut at a 45 degree angle slanting up towards the top on the inside of the cleat.

11) And then I set the cabinet on wall cleat:

At this point there is one coat of Rub-On Polly on the cabinet. I will probably apply four coats.

12) One of the cabinets is now finished and the other is well on its way. Here is a photo of the finished cabinet (Kristel’s) with the doors all closed:

The magnetic catches were installed as per the plans and they do hold the doors closed if one is careful, but these will be in a shop and the doors will end up with a lot of tools hanging from them, so I augmented each set of doors with a latch about 60% of the way up the door. They feel much more secure with the latch.

13) I made 7 bins out of scrap plywood for each cabinet (one more for each cabinet than called for in the plans) to fit on the bottom of each cabinet. I decided to paint them different colours in order to assist in organization. Here are the bins drying after two coats of paint:

I will apply a third coat.

Frank, you're doing a great job on this. Looks like a very useful project. You just can't have enough organization.

Jason Tuinstra said:
Frank, you're doing a great job on this. Looks like a very useful project. You just can't have enough organization.
Click to expand...

Thanks Jason. About the organization, I am sure that these cabinets will help out a lot in the workshops (such as they are) in the homes of both my daughters.
K

Your daughters will be very happy to receive them for Christmas, great job on building them

Your daughters will be very happy to receive them for Christmas, great job on building them

Both cabinets are finally finished. This job took me a lot longer than I expected it to -mostly because my project kept taking a back seat to other work.

Here is a sequence of pictures demonstrating the functionality of one of them (Kristel’s): 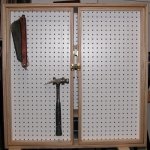 16) Both outside doors open:

​
The second cabinet that I made (for Kathleen) has to fit into a space where the outside doors could not be open wide. In fact there will be only about 2 inches of clearance on both sides of the cabinet. This would not leave sufficient space to open the interior doors. If I tried to fit Kristel’s cabinet into that space, I would only be able to open the interior doors to a 49 degree angle.

18) Here I am using Kristel’s cabinet to demonstrate the problem:

​
I reduced the width of the external doors on Kathleen’s cabinet to half the width of the above cabinet. This gives one the ability to open an interior door to 71 degrees, not as good as 90 degrees, but I figure that it will be OK.

19) Here are a couple of pictures of Kathleen’s cabinet. It is possible without much difficulty to access the region behind the inside door.

Well done Frank! That is a great gift and will be much appreciated i"m sure!

Nice job on both cabinets, Frank. Thanks for documenting it. That's a very handy-looking design, and I'm sure the recipients will get a lot of use out of them.
D

Great work Frank. I think they will be amazed at how much they can actually put in the those cabinets. Your daughters should be proud.