I found this hanging from the rafters of the little house as I was moving stuff out of it the other day. 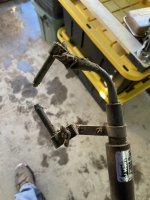 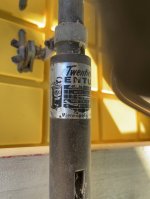 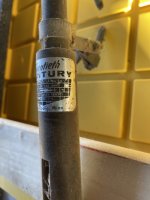 I asked my wife’s grandpa about it and he used it to do quite a bit of welding. He said he was never really good at it, but looking up other posts on the topic of using them, they were pretty inaccurate to weld with. I’ve seen some of his welds and they weren’t petty, but held.

I did see a couple of posts saying they were good for heating up specific spots of metal, such as for bending it, so may give that a try some day.

That is an interesting torch.... in my last years of high school I worked at the local movie house and a couple others the man owned in the area.... our projectors used carbon rods to create the light to show the film.... I never did the projection myself, but spent a lot of time in the projection booth with the projectionist and watched him fire them up.... they did generate a lot of heat and in Texas summers, the booth got pretty hot during the movies.

Looks like quite a blunt instrument, could definitely be handy for some uses though,or at least fun to poke around with I reckon.

This guy had a decent short overview, I suspect that getting good with it would require a fair bit of practice.

I had one like that, and a single rod version, back before I got the pacemaker and they forbid me from being near any high energy arcs. All of my larger metal working equipment is now in my #2 son's shop, but It's just across town, so when I need something I just get him to make what I need. He is a certified welder, and I never was anyway.

The single rod version of carbon arc torches was used much like a plasma cutter. Striking the arc on the cut line, and then using a compressed air stream to blow the molten metal out of the cut worked quite well to cut up to about 1/2" mild steel, but a plasma cutter does a better job. He has a plasma cutter, so I doubt he will ever use the single rod torch version.

The two rod version, placed under a ladle of lead or other metal heated it quite rapidly. It also heats the frying oil very quickly when frying the Thanksgiving Turkey but alas, I'm not allowed to eat that any more either.

Welders dark glasses, like you would use for gas torch welding/cutting is a "must have" if using either one of these.

I was the Stage Manager for a Summer Stock theater one Summer after graduating, and having learned stage lighting and operations from a teacher who had worked on Off Broadway stages before becoming a teacher, I was offered the job. The 35 mm projectors in this Summer Theater were old carbon arc lit projectors, with a motor/generator set in the back corner of the projection booth to supply the high current DC to operate them. One night a week was "Feature Movie Night", so I also ran the projectors for that. Again, dark welding glasses were "must have" for that job, although a window in the projector door with dark glass usually allowed adjusting the gap between the carbon rods, it was difficult to always see the arc clearly enough through that window, so the dark glasses were frequently needed.