I just want to communicate the great service I recently received from Steve Voigt of Voigt Planes. As many of you know I moved from the wet side of the Cascades to the dry side. The humidity change was not kind to many items that were acclimatized to the wet side. I had a saw bench that literally fell apart from the change. Another item that did not fare well was my wooden Try Plane from Voigt Planes. It twisted and shrunk. I could not get the iron or wedge in. It was very strange as the Jack Plane also from Voigt Planes had no problems.

I contacted Steve and he said to ship it back to him and he would fix it. I received the plane back the other day and this is what he said he did:
The plane looks as if it is brand new and cuts great. I did only a quick test, but will be giving it a work out soon. I really appreciate Steve making this repair a priority. It was only a week or so after I sent it to him that I got it back. 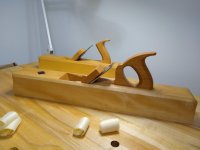 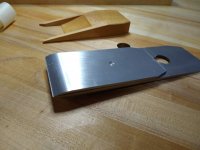