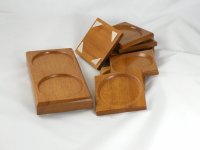 Brazilian Mahogany, Wine Bottle/Glasses Coasters for use on polished Table. 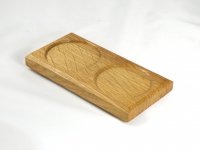 One bottle is never enough when we sit down to a satisfying repast.

They all look great.

Very clean work as per your usual, too.

Chas Jones said:
One bottle is never enough when we sit down to a satisfying repast.
Click to expand...

Then I guess you won't be needing any of my "quitter" stops?? 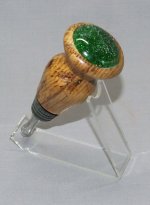 Chuck Ellis said:
Then I guess you won't be needing any of my "quitter" stops??
View attachment 120002
Click to expand...

They only come into use on the Cooks refreshment bottles

Chas Jones said:
They only come into use on the Cooks refreshment bottles
Click to expand...

One for the pot
Two for the cook
Repeat until the cook is ready for dinner.

Ryan Mooney said:
One for the pot
Two for the cook
Repeat until the cook is ready for dinner.
Click to expand...

That little ditty reminds me of Justin Wilson, the late beloved Cajun chef who had a cooking show on TV. He always cooked with wine and he always sampled the wine more than a few times while he was cooking. His sampling lubricated both his mind and his tongue and he would start telling stories or do funny things.

On one occasion he was making a big pot of spaghetti sauce and of course added quite a bit of wine to the recipe. He sampled the wine each time he added some to the pot and reminded the viewing audience that wine that was not suitable for drinking should not be used for cooking.

As the show progressed his words became noticeably slurred and when it became time to cook the spaghetti pasta he was practically staggering. He kept checking on the pasta to make sure it was done and asked the studio audience if its members knew when the pasta was done. The live studio audience chimed in with "al dente". Justin agreed and asked if they knew a fool proof way to check whether the pasta was al dente or not.

He then fished out one single strand of the spaghetti from the pot and said, "If the pasta is al dente you can flang (sic fling) it against the wall and it should stick. He proceeded to do just that and suddenly the audience burst into laughter. Justin looked at the camera and the studio audience and reported that he had missed the whole dang wall.

So two for the cook might be better if applied after the meal prep is complete.

P.S. I love the coasters. When I was first teaching myself how to turn I turned about 100 coasters from every kind of flat wood scrap I had. We still have quite a few of them as my wife loves to use them at dinner parties which we used to have. Neither of us drink any more so those coasters are languishing in drawers pf the apothecary chest I built.
Last edited: Apr 2, 2022

Mike Stafford said:
. Neither of us drink any more so those coasters are languishing in drawers pf the apothecary chest I built.
Click to expand...