The dust will be flying soon

Getting closer. I got the log clamps on tonight, oil in the motor, and the log stops set. I still need to square them to the bunks, loosen all the bolts on the mill head and shake it down (and retighten), the square up the blade to the bunks and check it’s tracking. Maybe tomorrow or Sunday I can make some dust.

We’ll, I ended up pulling the stumps where the log deck is to go today. And moving all the junk that was piled around them. I now have a mostly clean slate to start with. Still two hickory trunks on the front corner , which may just get trimmed at ground level. 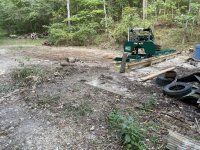 There was a Hickory and two walnuts they all grew from seeds, so all had very large tap roots on them. The hickory took the longest as it had several downward growing roots. Here you can see the tap root was almost larger than the trunk above the ground. 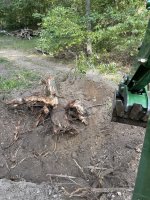 Both the walnut roots spread out, some just under the soil, several about 2’ down.

So, in filling the holes where the roots were, I wasn’t paying attention to the backhoe and ended up pushing the mill about a foot on one end while backing up. Tomorrow I get to start squaring it up and leveling it again.