We went down this weekend to work on the farm house. I spent most of Saturday morning spraying outdoor cleaner and power washing the siding and roof of the house and front of the garage while my wife cleaned up the flower beds and trimming shrubs. Also installed some solar lighting since there aren't any porch lights on the front (for now).

The toilet was another project I needed to work on. It's about 15 years old and there was a leak somewhere on the tank, so I brought parts to just rebuild it and put all new seals and valves in it. We also brought a couple of cartons of left over flooring from our house to cover the bathroom floor. Upon removal of the toilet I could tell I was going to have more work to do. I knew the floor wasn't real level, and had brought some leveling compound, but I could tell the subfloor was wet and spongy.

I was actually afraid the only thing holding up the toilet was the flange/pipe. After a little digging it turns out they used an OSB type of board (quite old actually, probably 40 years old with the layers of tile that I removed). The leak around the flange caused a large area to rot out.

After cutting back to un-rotted subfloor, it turned out there was a layer of tar paper and the oak planks below that were in great condition. I found some scrap lumber in the garage and was able to build back the areas that were removed fill where needed. I was then able to start getting laminate laid. I got enough done to re-set the toilet, then finished up the flooring this morning. 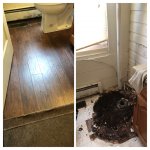 Her grandpa actually hand dug the basement under this house, shoring it up, hand mixing all the concrete by hand, and replacing the old rock foundation section by section. It's no wonder he's lived to be 98, 99 later this year. Still sharp as a tack too.

He's harnessed one of the springs on the property and gravity feeds it into a trough he built in the basement. The water comes in at 55* year round. He used to pump that water through the baseboard heating radiators through-out the house. He now has it ran to a heat pump system that uses the water to cool the house in the summer, and pulls heat from the water in the winter to warm it.

That's amazing. Looks like a great piece of history.

I miss having good spring water. We had spring water my whole childhood from a deep mountain spring (several at different places actually but similar water).

Using it as a heat pump source is an A++ idea. I reckon I'd have a rollicking good conversation with you wifes grandpa, he sounds like a really awesome guy

You have got your plate full again. The farm looks like a really great project site with lots of surprises.
The bones are there to build it back to it's former beauty.
David

Looks like quite an interesting project with some fantastic rewards in the end.

Thank goodness you finally found a project to do in your spare time. I've been concerned that you didn't have enough to do, lol.

Ryan Mooney said:
I miss having good spring water. We had spring water my whole childhood from a deep mountain spring (several at different places actually but similar water).

Using it as a heat pump source is an A++ idea. I reckon I'd have a rollicking good conversation with you wifes grandpa, he sounds like a really awesome guy
Click to expand...

Hopefully we'll get to spend some time chatting with him ourselves. Since they are in the assisted living center, they can't leave or have visitors. We've been sitting outside their window and chatting with them on the phone, but his hearing isn't so good. His eyes aren't a good either, so my wife's been at least writing them letters in a large font to let them know what all we've been doing.


Vaughn McMillan said:
Thank goodness you finally found a project to do in your spare time. I've been concerned that you didn't have enough to do, lol.
Click to expand...

LOL, Well, to be honest, my wife has found the new project, I just agreed to it.

Here are a few more pics attached, there's about 120 acres, so most of the land you see in the pics. Has 2 creeks, 4-5 springs, 3 ponds. The barn looks to be in decent condition, but need to do some poking around on the beams to see if there is any major rot. I have about 8 or so floor joist for the upper floor that need repairing sooner, rather than later. We'll probably pull the wood siding a do a red metal to seal it up and maybe consider making it my shop. Probably could sell the barn to someone that re-claims them, but as a woodworker I really would love to have it as a working shop and it's a part of the farm's history.

We found some time before we left to do some "plinking" at some paper targets, with a few .22 pistols I brought.

I think she's wanting to claim that Ruger Mark IV for herself now.

Man this looks like such a great little spot, so many cool projects

Yep, I think Darren just wants to move there cause he's bored and needs some more projects.

Beautiful setting. Looks like raft of projects to keep you out of trouble till the end of time. Now on your resume Farmer Darren. How does you gonna have?
David

Looks like a piece of heaven to me, great property with great family history

Are there some far off future plans to shore up that ridge beam, or does it just look like it is sagging in the pictures/

Are there some far off future plans to shore up that ridge beam, or does it just look like it is sagging in the pictures/
Click to expand...

Thanks, it's pretty peaceful out there.

There is a sag in the first floor that seems to have carried up to the roof. It has already been shored up with a large oak beam and now a rigid steel post added as it has sagged since it was installed probably 40 years ago, but never re-leveled. The main/center support wall in the house is about 2" out of plumb from top to bottom also, and looks to have a large header that is sagging. I plan to add some additional suports/beams in the basement and level it back out, then will shore up and replace the center wall of the house with a new one and some larger cased openings using LVL beams.

We eventually plan to add on to the house and add a new 1st level master bedroom/bath on the right side, won't be until after we sell our current house, but will make some updates to the existing farm house prior (once we have ownership). It will actually be fully opened up inside and fix any structural issues, re-wire, re-plumb, new hvac, and insulate. Seems like a lot, but we plan for this to be our last house. We still have about a year before we can move forward with those plans, and we're still working through some of hurdles of taking ownership. A big hurdle is trying to work through the sale since her grandparents are in a assisted living home and can't leave or even talk in person. Her grandpa has a hard time hearing on the phone, so conversations are short and it's taking some time to work through. Kind of ironic as he bought the property unseen based on some photographs and letters back in the early 50's. Seems like we're working through the sale to us through letters now.
You must log in or register to reply here.
Share:
Facebook Twitter Reddit Pinterest Tumblr WhatsApp Email Link
Menu
Log in
Register
Top