OK. Larry asked for it so I've just added it to a new thread. I've saved it out as a v2015 file so I think everyone who wants it can open it.

Basic details:
Units set to Fractional with Display Precision set to 1/64th in.
Back face color is a green that I'd be unlikely to use as a material in a model.
Camera is set to a fairly close position so it's a good start for furniture-sized models. The angle of view is a bit narrower than that in the OEM templates so there's less wide angle distortion.

Usage: Download the file to your computer and open it in SketchUp. Immediately hit File>Save as template. Give it a name and make sure Use as default is checked.
Easy peasy.

well i must be jinxed this month.. i tried it the other day from your instructions and the program came up with nothing like yours so did it just now and got the same thing no change just minmal stuff on top.. i have about had it not working for me..

larry merlau said:
...and got the same thing no change just minmal stuff on top...
Click to expand...

What do you mean by minimal stuff on top? Are you expecting all the toolbars I have on mine? If so, the template doesn't include the toolbars and extensions. The template is just the style, camera position, units and a few other things.

this one with stuff on top and side

So the toolbars? As I said, those aren't part of the template. Toolbars are a program setting.

Your screen shot shows the following toolbars. Across the top: Standard, Views, Styles, Shadows. And down the side there are two toolbars but in later versions those tools are found on the Large Toolset toolbar. 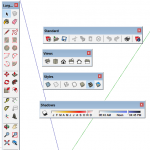 You can bring those toolbars out in the View menu under Toolbars.

Is there a way to save tool bar set ups? Every time I switch to a newer version I lose my tool bar set up and have to go through it all over again (not that it's a big deal, though).

Ted, each new version of SketchUp installs as a new program. It doesn't overwrite the previous version. Unfortunately there's no automated way to make the toolbars show up the same way as they did in the previous version. My process, after installing SketchUp correctly, is to install fresh copies of all the extensions I've got. Actually setting up a new version is a good time to do some house cleaning and get rid of extensions you don't use. I make a screen shot of the previous version so I can see the toolbars and where they are. I import that screen shot into the new SketchUp version so I can use it as a reference. I create a couple of custom toolbars for the left side instead of using the Large Toolset and then I put out the toolbars for extensions I use regularly. There are tools on the Large Toolset toolbar I almost never use like Dimensions, Text, and 3D Text that so my custom toolbars omit them.

Thanks, Dave. This begs the question. Is there an optimal custom toolbar set up for woodworking with a focus on designing furniture/cabinetry. I suspect your tool bar is much more refined for the things most of us do? 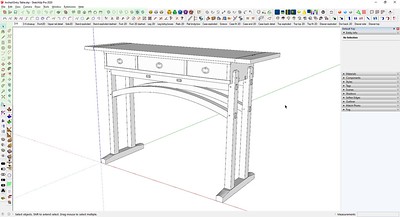 The toolbars shown highlighted in the upper left part of the screen are native tools. The ones on the left are my custom toolbars. Note no Orbit or Pan along with the omission of Dimensions, text, etc. All the rest come from extensions. Some of those extensions don't get used that often but when I do use them I don't want to drag out the toolbar.

There are a few extensions that I think are very useful for modeling for woodworking. Short list. More may come to mind later.

FredoCorner
RoundCorner
Curviloft
Solid Inspector2
Angular Dimensions2 (as mentioned in the other thread although I only use it for quickie things to show angles but not in my normal work.)
Bezier Spline
Joint Push/Pull
Wudworx tools. Primarily the Dovetail and Drill tools. 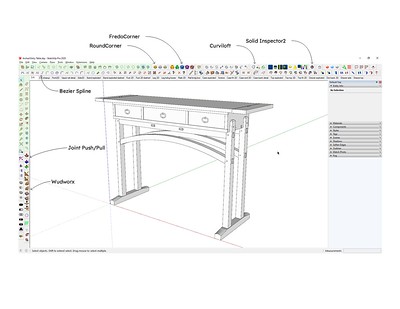 And I should have mentioned Eneroth Solid Tools and/or BoolTools2. For the Make users BoolTools2 would be the choice.
Last edited: Feb 15, 2020

Thanks, Dave. The pics are very helpful. Holy mackerel, that's a lot of tools!

It is but not nearly all of the ones I have. And it's like the shop. Lots of tools but only a few get used for any given project. Just don't tell my wife or she'll think I need to sell a bunch of them off.

I tried listing some of my unused SketchUp tools on Craigslist, but got no takers.

Vaughn McMillan said:
I tried listing some of my unused SketchUp tools on Craigslist, but got no takers.
Click to expand...