I am pretending we have a food and recipe forum. And I have a question.

Looking at meat injectors on Amazon. Anybody use them? What to look for? What to avoid?

You know, I use them when I do turkey's but I haven't on too many other things.

Look for big holes in the needle. The ones I have just look like a big syringe.

Small holes get clogged up, but that's about all I know about them!

OK. The goal is to smoke beef and yield juicy, tender, fall apart, flavor-able meat for a variety of things. I remember a shredded beef sandwich on a big ol' fresh Kaiser roll with a slice of sweet onion, crunchy dill pickles, and German brown mustard of my storied youth. What I don't remember is which cut of beef and the particular details for cooking it. Suggestions?

I'd go with brisket. So.. here is my epiphany on brisket.. We've made a bunch of corned beef and turned a fair bit of that into pastrami (which is just smoked corned beef) and while they were good.. they weren't fall down slavering at the mouth good until we discovered the secret! Steaming! After you've made the pastrami you have to steam it .. for hours.. good food often isn't fast alas! There is a place in Portland that makes it close to right: http://www.kennyandzukes.com/

Corned beef
--------------------
1 gallon water
2 cups Kosher salt (you can also use pickling salt with is also iodine free but then you have to adjust the amount because pickling salt is a LOT more dense so stick with kosher to avoid math)
5 teaspoons pink curing salt (sodium nitrite, #1 cure) - technically optional if you are really clean also makes meat attractively red
3 Tbsp pickling spices (you can get these premixed at most grocers or
1/2 cup brown sugar (optional imho)
This does about 5 lbs, adjust up as needed.
Bring to a boil to sterilize/dissolve.
Cool covered.
Add to meat in some sort of container you won't need for a while. Easiest way is to put meat + mix into a large zip lock bag, but anyway you can keep it submerged works, sometimes you need to put a plate on it to keep it under if its in a bucket.
Turn meat over daily.
Cure for 5 -7 days (have gone as long as 2 weeks, honestly couldn't see much difference after 1week).
You now have corned beef.. You could also buy this.. but hey where is the fun in that.

Pastrami
--------------
Some folks do a cold water soak for a .. I'm not a big salt fan and usually don't bother and its not excessively salty to me. If you don't like much salt at all (or are reducing sodium) soak it in ice water for ~3-4 hours here.
Rinse corned beef (if not soaked), pat dry and let sit on a rack covered with a towel for an hour or more to finish surface drying (if the surface isn't dry it doesn't pick up the smoke as well).
Some people put other spice rubs on around here. I may add a little cracked black pepper and coriander or not depending on how I feel.
Smoke for about 45m-1hour per pound. I like doing it pretty cold of you can keep it below 100 that's perfect; but you can also do it hot if you have to, just adjust down the smoking time to avoid getting the inside to hot. It won't take up as much flavor hot smoked but its still pretty good. At the end raise the temp to 250-300 (smoker temp) for the last ~hour and cook until the meat hits about 145 (we're going to cook it again so around 145 is where I usually stop for the long process - if you were going straight to sandwiches from the smoker you'd take it to 165 or so).

Technically you could buy the pastrami as well.. but it would be compromising pretty hard.. and imho store bought all cooked to far for step 3 and doesn't have enough fat left on

Now comes the magic! Put the meat into a steamer with enough water to just not touch the meat. Steam for ~4-5 hours (seriously yes 4-5 trust me on this one). Make sure to check the water every 30m or so cause if it runs dry boy howdy the smell and all is lost (not to mention fun times cleaning the pot)! At the end take it out and let it sit for a few minutes to "firm up" cause it will be absolutely melty to start with! The long steam does some sort of magic to the fat turning it buttery and the meat is dreamy. Cut cross grain and enjoy!

This guy is on the right track and has some commentary about another famous spot doing this process: http://www.amazingribs.com/recipes/beef/close_to_katzs_home_made_pastrami.html

Now that we've gone this far, well can't ruin it with store mustard!

Mustard/beer + above into the blender and whir whir to break up mustard a bit (not to much its better chunky). Add more beer if to dry. Add more vinegar if not tangy enough add more chinese mustard (carefully) if not hot enough. Best if put in jars and let set for 2-3 days but pretty darn good right out of the box.

FYI Dijon and plain yellow mustard is even easier and much faster and still waay better than store bought.

edit: no needles were harmed in any of this process. Usually I only use a needle if I'm curing something with bones in it and need to get the cure down alongside the bone or perhaps a really large/dense piece of meat where the cure wouldn't penetrate well like a boneless ham. Not needed for this.

Typically one that looks like it will fit your hand(s) well with a good sized handle, mine has a ring on the handle to let my thumb go through. This helps when my hands get a bit slimy from the meat. Look for one that has a needle that is removable for cleaning and has some good sized holes in the end, it doesn't have to be sharp as a tack, slightly rounded is fine. The larger holes will let any spices you may add flow through rather than clogging it. My needle is probably about 1/8" or so in diameter, maybe a little smaller.

I mostly use it for chicken, turkey, and pork butts. For pork butts I will soak in a brine overnight, but also inject the brine inside the meat, otherwise they taste a little bland to me.

For the beef, I'm guessing it was probably one of the two that Ryan suggested, though if it was smokey, would lean towards the pastrami. For most briskets, I smoke them at about 225 for 3 to 5 hours (depending on the size of the cut), then wrap them up in foil with a little liquid (coke or beer) add let them steam until the internal temp is 190, then I'll pull them, wrap them in a towel (still in foil) and place them in a cooler to rest for another hour. 185-190 seems to be the magic temp that it lets the collagen in the meat break down and become tender rather than elastic. (http://www.amazingribs.com/tips_and_technique/the_stall.html)

Sounds like you're ready to dive right into some good eats, Carol!

My first injector was one of these: 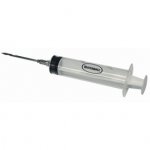 It was attached to the side of a jar of marinade I wanted to try. It has a smallish opening, which was a problem with some marinades. It holds 1oz of marinade. The biggest issue with this type is remembering NOT to put it back together after cleaning! DAMHIKT

It didn't take me too long to grow up and get a more serious injector like this one: 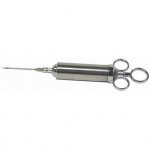 When this one is assembled, it's about a foot long and can shoot some serious liquids - haven't measured, but probably 5-6oz.

I can't give you a specific marinade mix I use for different products because I tend to vary them somewhat.

For Boston butt, I generally use mostly an apple juice base but I might dissolve some garlic powder and salt in it.

I keep brisket simple with some beef broth and maybe a bit of cayenne.

I'll get a bit more elaborate with turkeys by starting a marinade several hours in advance of cooking. Actually, the first step is making a brine with salt, sugar, oranges, lemons and limes and let the turkey finish thawing overnight in the solution. The next morning, I rinse the citrus and put a few pieces in a sauce pan with some water. Then, add a rough-chopped onion, pepper corns, salt, fresh herbs (basil, rosemary, parsley). Let the mixture reduce to suck the love out of everything, then strain it into a Pyrex bowl. While the liquid is still warm, add as much butter as you dare, generally at least a half pound per 16lb turkey. Oh, and don't throw away the citrus and onion yet. When preparing the turkey for the smoker, I add the citrus and onion to the main cavity as well as the neck area and truss the openings with stainless steel skewers. By the way, don't waste you money on expensive pre-basted turkeys. I'll find out which store has the cheapest turkeys that still have good form. By the time I get through with this preparation, the sucker will turn out great. I place the turkey on my smoker grate breast side down for about the first 90 minutes at about 275°, the cook the rest of the time on its back. Total cook time varies with size but is usually in the 8-hour range.

Mine main one is like the one Bill shows, with the rings, but I have another that works well and has a shorter stroke that might be easier on your hands like this.

I've also got a set of these silicon mitts for handling large chunks of meat. They can be washed in the sink/dishwasher and are good up to 500 degrees.