Fumin oak with ammonia, or brushing it?

I'm thinking about darkening the oak legs of my cabinet, which I have not started yet. The question is, would I get similar results if instead of fuming it I apply less concentrated ammonia with a brush?

I haven't done this, but heard that it takes very strong ammonia to work, and is very hazardous to use. What you get from the grocery store is only a few % in water. Knowing how dangerous strong ammonia is makes me very unwilling to even consider it. Refrigeration ammonia is in the high 90% to 99% ammonia. You will be going down while catching your second breath of it and your chances of recovery are very slim. My son is the senior refrigeration tech for the distribution center of a huge food store chain. I worry about him frequently.

There are wood stains that can achieve nearly the same result without the hazard level.

Whenever you fume with ammonia you should not apply it directly to the wood.

I always built a plastic tent under which I could sit the item I was going to fume and then placed a pan under the tent with the item. If it is important that all surfaces get fumed then the tent must be kept off the top of whatever you are fuming. If anything is sitting upon the top of the object being fumed you can end up with a "shadow" from the object which will be very hard to get out/equalize color.

P.S. You can use the same tent method to fume purpleheart with muriatic acid which turns the wood to a beautiful plum purple color that seems to last a lot longer than purpleheart is normally purple. I used to do it with pen blanks after they were turned and before I applied a finish. Women loved those plum colored pens.

Charles is right. You should use anhydrous ammonia which can be hard to get unless you have contacts with a farmer who uses it, a refrigeration man who uses it or a chemical company.

As dangerous as store bought ammonia is, anhydrous ammonia fumes will take your breath, cause you to gasp, which will fill your lungs with the fumes and can then kill you. You will pass out and if someone isn't handy you will be in big trouble. If you don't have a proper respirator rated for ammonia don't mess with it.

Back in my early days working in a dairy we used ammonia as a refrigerant. One particularly cold winter we sprung a leak and lost 1000 pounds of ammonia from a condenser that was mounted on the roof. Ammonia is heavier than air and flowed down and into the plant. One of the young supervisors caught a whiff of it and went to investigate. He was overwhelmed because he didn't wear a mask. Fortunately one of the more senior employees reacted properly and put on one of the masks and was able to go and rescue the supervisor.

1000 pounds of liquid ammonia, when it vaporizes ending up flooding a large area around the plant. Next thing you know the firemen were there, police, HAZMAT, OSHA and they were evacuating the homes and apartments within a mile of the plant. It was a mess.

Once the ammonia dissipated we had to find the leak and repair it and then refill that leg of the system because of how cold it was. It was -5 degrees outside and we needed the refrigeration to keep the milk from freezing. So I had the unenviable task of being one the guys who helped the maintenance supervisor refill the system one 100 pound cylinder at a time standing in the bitter cold with high winds from a Nor'easter in the middle of the night. Every time we changed a cylinder a little squirt of the ammonia would pop out and make you gag. We couldn't wear the masks because they would freeze up from the water vapor in our breath. We had them with us so we could put them on and run if something went awry.

Bottom line......"Danger, danger Will Robinson!" I would be very careful like not doing it at all.

Sounds like fuming (or otherwise) with ammonia is something I WON'T be doing ... I can't even water houseplants without getting soaking wet.

I fumed an oak bowl with household ammonia once. I put the bowl on a stand in a lidded plastic bin with a couple of tuna fish cans of ammonia and left it sealed overnight. By the next day, the ammonia smell was gone, but the wood wasn't as dark as I wanted, so I loaded up some fresh ammonia and did it for another overnight fuming. It worked - sort of - but it didn't get the oak as dark as stronger ammonia would have. 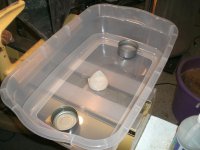 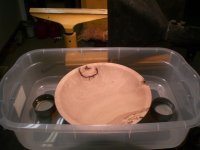 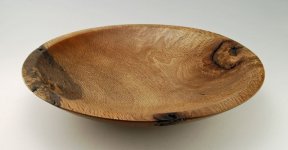