While working on another small project today, I was digging around under my workbench looking for several packages of dowels that I knew "had to be there". (They weren't. )

What I did find was the worklight from my Dewalt scrollsaw. I took it off a couple years ago because it was too fiddly and too hot, it didn't put out much light, and it generally got in the way.

Meanwhile, at my lathe I've been making do with a light that I clip to my turning tool rack: 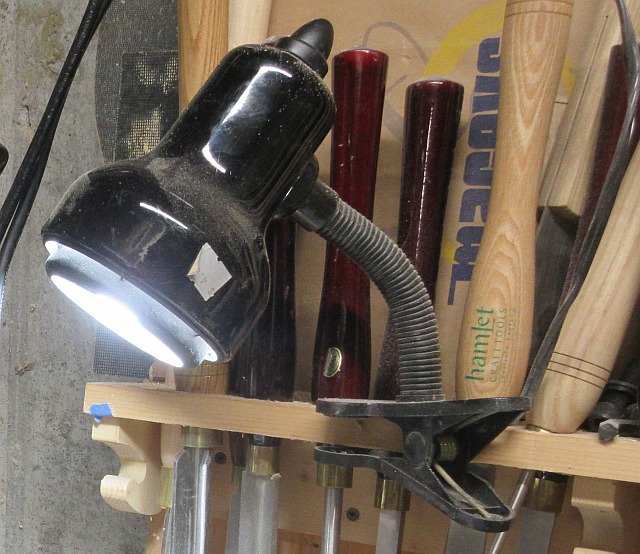 So I took the plunge and drilled a pair of holes in my as-yet-unmolested-in-16-years lathe... 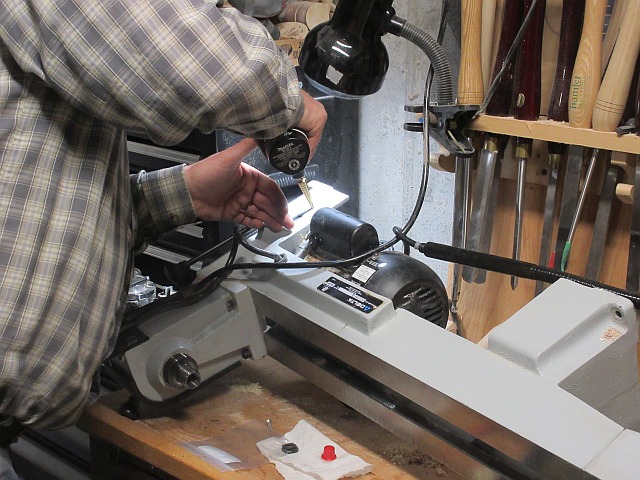 ... and used some nylon locknuts that I inherited from a now-deceased woodworker friend to mount the scrollsaw light to the frame. 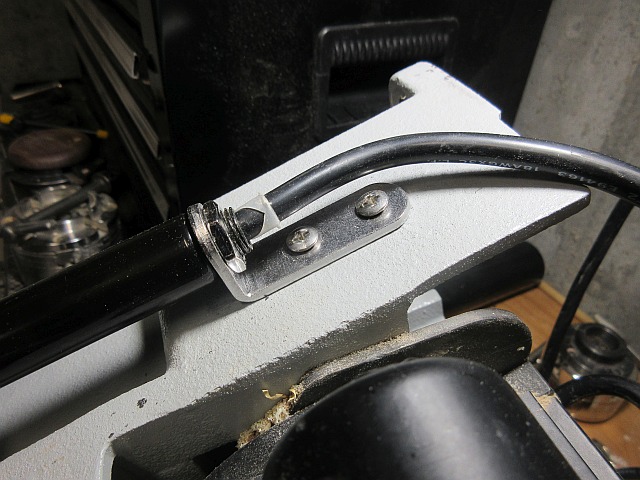 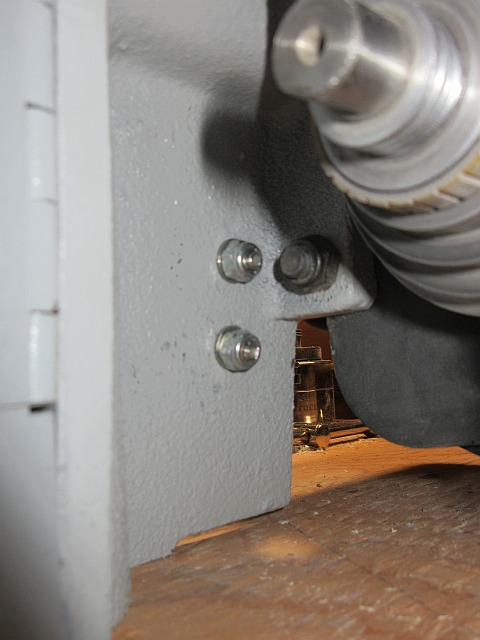 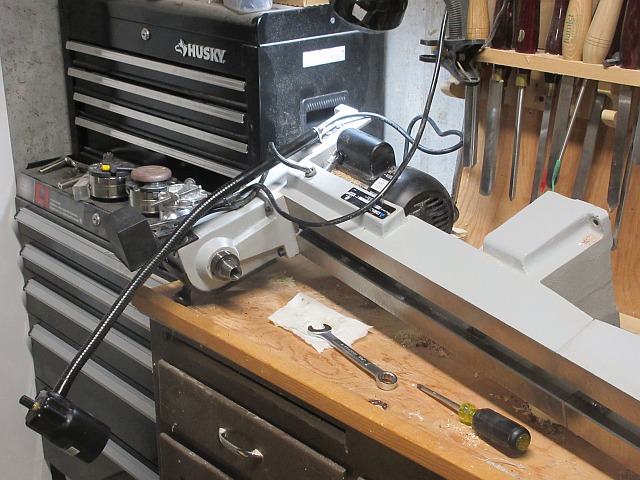 Voila! Ready to use! Well, almost. 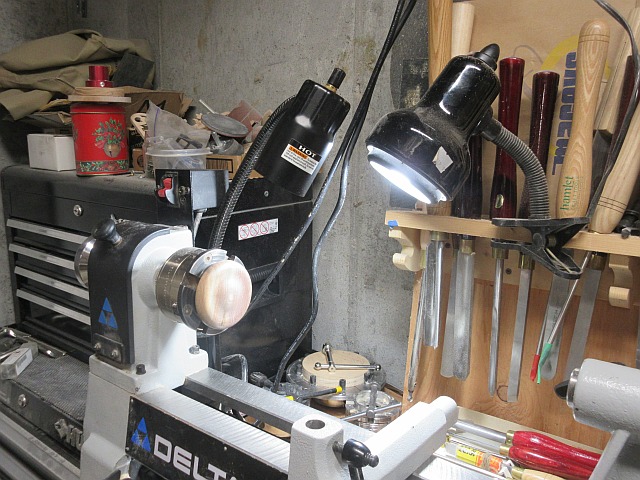 I still have the problem of a too-hot bulb that doesn't put out much light. (And what it does put out is yellow-orange. Yuck!) 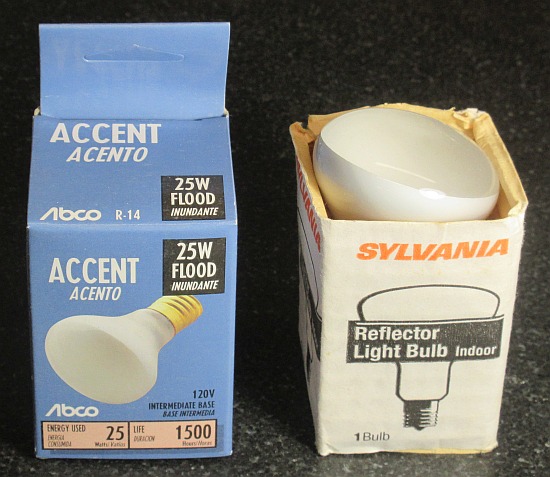 I almost pulled the trigger on some daylight LEDs that would fit the small E17 socket, but then realized that this is the only such lamp I have, and I would never use all 4 bulbs.

So for now I have ordered an adapter instead, which should let me use a full-size bulb in the lathe-mounted lamp.

You're worried about me staring at a bare, unshrouded bulb, right? Well, I figure I can turn my own lampshade ... after the adapter shows up in another 3-to-8 weeks. Sigh...
Last edited: Dec 26, 2019

Lighting for a lathe has always been a challenge for me. I've had overhead fluorescent lights only to get broken by flying bark, etc. Your solution is interesting. And, certainly workable. I seem to want or need my lighting to be movable. So, I have two lights both with 75w LED flood light bulbs in them. They are relatively heavy clip ons. One I keep attached to an old camera tripod that is easy to move and adjust. The other changes around from the tool rack to sometimes even on the tail stock. It works alright for me, but might not for others. I'm not sure that there is a perfect light setup for me.

Looks like a nice setup. I would like to ask, have you ever had to change the bearing on your lathe? I think mine may need new bearings and somewhere I read what bearings to buy that are better than the original ones. I wrote it down, but alas the piece of paper must be stored with your dowels you are looking for. I have a clicking when my lathe is on (I use it mostly as a sander with sanding mops now). I figure it could be bearings or maybe the belt?

Paul Douglass said:
[...] have you ever had to change the bearing on your lathe? I think mine may need new bearings and somewhere I read what bearings to buy that are better than the original ones. [...] I have a clicking when my lathe is on (I use it mostly as a sander with sanding mops now). I figure it could be bearings or maybe the belt?
Click to expand...

Funny you should ask. I did change out my bearings once upon a time, but it may not have been necessary.

I turned for a long time with the "clicking" you mentioned; didn't really know what to do about it. Eventually I pulled the original bearings from my Delta LA200 Midi Lathe, got the numbers off of them, and shopped for a new set. I bought two pair of these: 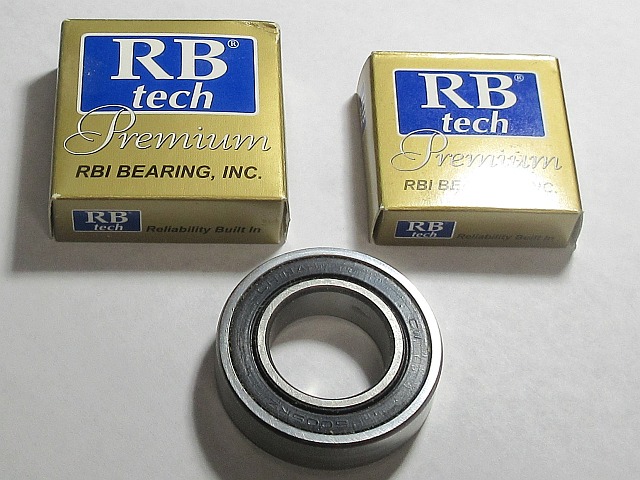 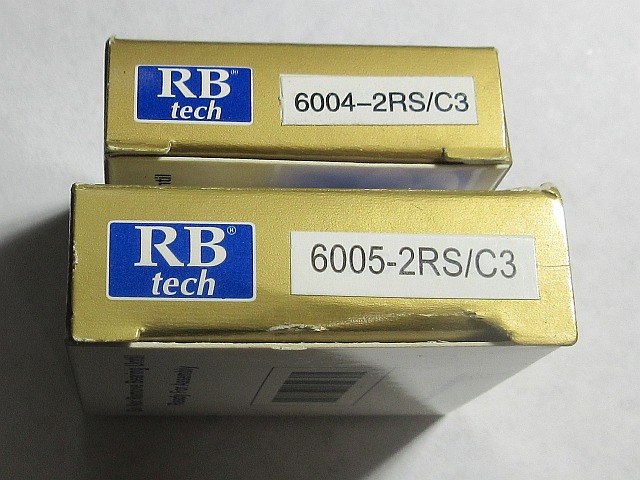 But after I installed a pair and turned the lathe on, the clicking started right up again!

In the end I found that a set screw on the (lower?) pulley was loose. When I tightened it up, the clicking went away.

I can't find the smaller original bearing. If I remember right it felt a little "gritty" or had a small "catch" that I could feel, so I must have chucked it. But the larger original bearing (in the first photo above) still feels pretty smooth.
Last edited: Dec 26, 2019

I had the "clicking" on my old lathe. Discovered the same thing. Loose set screws on the pulleys on the Reeve's drive. But, I also had to replace the headstock bearings once. I ordered them from the manufacturer, that way I figgered I would for sure get the right ones. I honestly didn't explore the aftermarket bearings as I didn't really have good specs on what to get.

Thanks for the info. I saved your picture with the bearing numbers. I'll be checking the pulleys.

Looks like a great solution and an excellent way to put an unused piece of kit to work, Kerry.


Dave Hoskins said:
Lighting for a lathe has always been a challenge for me. I've had overhead fluorescent lights only to get broken by flying bark, etc. Your solution is interesting. And, certainly workable. I seem to want or need my lighting to be movable...
Click to expand...

Dave, here's the approach I took for movable light at my lathe.

It's proven to be very handy over the years. And I end up using the light for other tasks near the lathe as well.

That's an interesting solution, Vaughn. Let me contemplate and deliberate and conjurgate and and get to thunking.

Dave Hoskins said:
That's an interesting solution, Vaughn. Let me contemplate and deliberate and conjurgate and and get to thunking.
Click to expand...

It's been handier than I ever thought it would be.

Well, ok lots of good ideas here! I'll have to do something similar as I have two lights that really need better homes than they have and I think I can make a combination of Kerry's and Vaughns theory work for them

I've considered the same light for a while... like Dave, I have a 4' flourescent light with what I think are LED tube that a friend gave me over my lathe and I've only knocked it down once ... I also have one of those articulating arm desk lights attached to the wall over the lathe that does a pretty good job of lighting... during the summer I can open the second door to my shop and get natural light, but then all my chips fly out the door onto my steps... still considering the flexible armed light that I can get closer to my work.

On the bearing situation, I've changed the bearings in my Jet1442 about 4 times in the last 8-10 years.... it does get a lot of work and often I'll mount a bowl blank that's out of round/balance and it will really shake the lathe... having the Reeves unit means I can't slow it down enough to really do an out of balance blank properly. The last set I put in the bearing itself failed... the metal shield came loose from the bearing housing and just disintegrated. The bearing that is right at the end of the shaft where the threads begin is compression fitted and a real pain to remove.. (No bearing puller)... I've worked a couple off with a couple of big screwdrivers, but it took about 45 minutes to an hour to get it off... this last time I just bought a new spindle. I have the most trouble with the aluminum pulleys that JET installs in the Reeves... I've replaced both the motor and the spindle pulleys more often than the bearings I buy my bearing from VXB. they're made in Japan and seem to be really good bearings and look to be the same as the originals from JET that they want $20+ for.

I had a pair of halogen work lights that gave lots of light and even more heat. I changed to a single LED work light. It's brighter, takes up less room, and gives off next to no heat. Here's the one I bought from Lowe's: