A couple of weeks ago a lady on my local Nextdoor.com asked if there were any woodworkers who could make a few porridge spurtles for her. I had to Google 'spurtle', but learned that a spurtle is just a glorified bonker that's made for stirring food as it cooks. A quick look on Etsy showed that they sell for $15 and up, so I texted her and told her I should be able to make her some spurtles. She agreed to my price of $20 each, and asked for three of them...two maple and one cherry. The local hardwood store sells partial boards (cut to any length you want), so I bought 14" of 6/4 x 6" cherry. They also had a leftover piece of 6/4 x 6"hard maple that was about 28" long, so I bought that one, too. I figured I could come up with a use for any extra wood that I ended up with.

I had intended to make an extra one in each of the two species, but the last maple blank I'd cut had a fatal crack in it, and I didn't feel like cutting another blank out of my leftover maple. The customer had sent me a photo of the spurtle she had, and asked me to roughly match the shape and size. I got the first one turned but still had it on the lathe when I sent her a photo for her approval. She asked to come by and see it in person, and when she did, she brought her old spurtle so I could get a closer match on the various diameters. She said I didn't need to match the dimensions exactly, but told me what features were important to her. I ad-libbed the various forms, but incorporated the things she wanted.

Here are the finished new spurtles, with her old one (made of myrtle) on the bottom. She specifically asked that I not finish them, as she was going to hit them with mineral oil herself. It's not really fine woodworking, but she just came by to pick them up and she was very happy with the results. 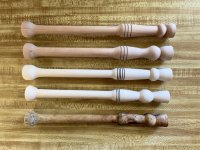 I've never heard of a "spurtle" either but those look like what she had, so I would say you did a fine job on those.

Vaughn McMillan said:
told me what features were important to her
Click to expand...

Looks like the old one has seen the oatmeal, walked through the porridge, and mashed the grits. Figured myrtle wouldn't have been my first choice but I bet it was sure pretty when it was new. The maple and cherry ones ought to hold up pretty well.

I like your spurtles, Vaughn. I made a few spurtles several years ago for a friend who liked to stir her gruel and pasta with them. Never did see any benefit to stirring with a bumpy wooden stick.

Hispanics use a special bumpy wooden stick called a molinillo to froth hot chocolate. It is inserted into the chocolate and rapidly rolled between the palms of your hands. Never tried to turn one of them however because I don't want froth on my hot chocolate. Here is a picture of a molinillo. 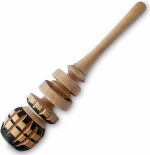 Looks like a bonker to keep "hubby" in place.
David

Nice! Those would be muddling mint for mojitos in these parts.

I have to admit I have never heard of a spurtle, either. Those look really good. Vaughn!

Ted Calver said:
Nice! Those would be muddling mint for mojitos in these parts.
Click to expand...

I made a few muddlers several years ago when there was a craze for mojitos. I think altogether I made 7 of them so it was not an important part of my business. One guy wanted me to cross hatch the flat end and I had no way or patience to do that.

Ted Calver said:
Nice! Those would be muddling mint for mojitos in these parts.
Click to expand...

According to this lady customer, one end is for stirring and the other is for muddling. She specifically wanted a crisp squared off flat on one end (for stirring) and a slightly convex face with radiused corners (for muddling) on the other. Since I do neither porridge nor mojitos, who was I to argue, lol?

I don't know if any of your family/friends have been bitten by the "Outlander" books and series mania but it has put Scottish lore, cooking, and history on the minds of millions of American Lassies. Mainly my wife and daughters

They all have asked for spurtles and other ancient kitchen utensils.
I got into the craze so I could buy expensive scotch and not get nasty looks from swmbo

I made these 3 spurtles several months ago for Marilyn and she uses them quite often for stirring up all kinds of stuff. A bunch more have been made for my daughters.
I got a scolding from my wife when I attempted to use one with the fancier end in the stew instead of the plain end. I guess I better watch the series..... 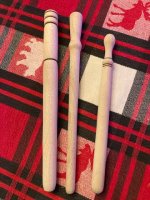 I like yours better than the ones I made, Bob. I would have liked to make something closer to what you did, but was building to the customer's specs.

Never used a "Spurtle" for cooking my self, but we do have a collection of wood spoons and utensils that I reach for when I cook.... we have a relatively narrow spatula shaped piece that's my go-to most of the time for stirring eggs and stews. May have to try a few of the spurtles to put with my bowls at the museum market place.
You must log in or register to reply here.
Share:
Facebook Twitter Reddit Pinterest Tumblr WhatsApp Email Share Link
Menu
Log in
Register
Top