I say that, but in the back of my mind this has been weighing heavily.

I got a text from my wife saying “Help, I fell through the stairs!” I ran into the house to see her with her leg up in the chair. Her office is upstairs and as she was coming down one of the steps gave way, luckily it was the third step up and her foot hit the floor below. 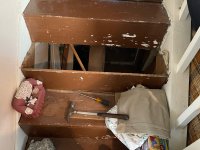 I took her for X-rays and all seems to be well, just a little bruised up.

The stairs have looked iffy for years, large gaps between the steps and on the sides here and there. Unfortunately there’s been so much junk stored under the stairs that I couldn’t see much of the structure. I had noted a center support/stringer and thought it was supporting the steps. I also noted in the gaps what looked to be stringers on each side of each step.

Well, turns out there was just duct tape on the bottom side on each side to close up drafts(?). The center support was completely detached by someone that had installed some duct work under the stairs in years past.

After getting back home, I spent some time clearing out the closet and removing most of the remaining steps. 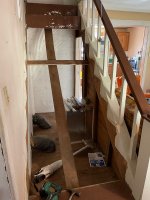 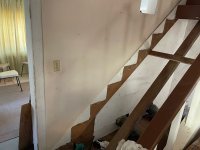 It’s almost scary how easily a few of the other steps came out, most were failing due to nail shear as the steps and kickers were nailed to the skirts on each side, no stringers or cleats to support them.

It took a couple of hours, but got them rebuilt adding some cleats and the center support back under the steps, hopefully they are good for another 100 years, though we plan to relocate them and bring them up to code in our remodel next year. 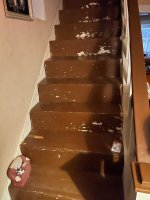 As you can see in the last pic there was some splitting and tear out in the step that failed and the one below it, those had some extra support added beneath. Most of the gaps are also gone now too. Luckily I had enough materials and screws in the work trailer to get the job done.

Really glad your wife only had minor injuries.

That could have been much more serious. I'm glad that she came out of it with so little injury. You did right to open up the stairs and fix it better. Doing all that in one day was very quick work. If my stairway had that little support I would have done more to it as well. Steps are dangerous when built well, but much worse when not properly built.

There was one broken step 2 steps down in the stairway of my home when I bought it. The treads are red oak and the broken one was split at a seam running side to side, likely from incomplete glue-up when originally made. Very little glue was holding the center of the joint together and the rest had failed. Each tread is a glue-up of several varying width boards. Glue and biscuits got it back together, with an improvised clamping scheme braced against the balusters and without the need to remove the whole step, but enough was removed during the repair to enable me to see that the stairway construction under the steps was very well done.

Other than a few filled finishing nail holes into the center stringer in the middle of the repaired step, the repair is completely invisible and it was back together in just a couple of hours. I removed my clamps that evening, but I put yellow tape stripes on the top of the repaired step for 24 hours to keep the family from using it until the next day, then removed the tape. 39 years later it is still holding well.

Yikes! That could have been so much worse. Good job on the rapid repair. I hope you added new duct tape.

Not yet, wife said what I had didn’t match, so had to special order it in brown.

Good job,! I love that toy sofa on the step.

Toni Ciuraneta said:
Good job,! I love that toy sofa on the step.
Click to expand...

That is actually a door stop, it has a brick in the base of the little couch. It's hand made, but not sure if her grandma made it or if it was a gift.

Darren Wright said:
That is actually a door stop, it has a brick in the base of the little couch. It's hand made, but not sure if her grandma made it or if it was a gift.
Click to expand...

Coincidentally, it's also where you were gonna be sleeping if you didn't get the stairs fixed, huh?

Vaughn McMillan said:
Coincidentally, it's also where you were gonna be sleeping if you didn't get the stairs fixed, huh?
Click to expand...