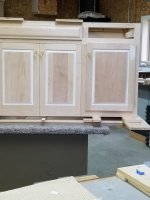 bottom pic - in line with other knobs 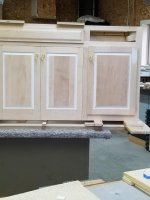 dont get nervous, these are just stuck on for visual now.

I think the second one personally. Once finished I think the offset would stand out more.

Oh and I thought "He's taking this hole patching thing to a new level" for a second.

Top pic - I assume there is another door to the left of those pictured which, IMHO would give balance with two up, two down.

I'm with the second one. Are the paired doors inset while the other is overlay?

no more doors rennie just 4 drawers, and yes the door is over lay and the other two are inset.
following a picture that was done like that but now all inset would have matched better
Dont for get to vote. so i can have numbers to remember

glenn bradley said:
I'm with the second one. Are the paired doors inset while the other is overlay?
Click to expand...

Agree with Glenn. Same question, too. Also, if the inset doors go clear to the bottom edge of the cabinet, shouldn't the other one, too? Doors would also look better if the top edges aligned.

In the absence of a second door to balance the appearance I will switch my vote to the second picture.
W

Boss says inline bottom picture. Reason being that you're not going to see the upper part of the door with the counter line drawing the eye as much so the eye will be more drawn to the knobs instead of the door line. I think once you paint the doors that will become even moreso. I was initially 50/50 but thinking about how the paint will work I'm slightly leaning towards agreeing with the boss (but might change my mind once the shadow lines land.. I think those would be the deciding factor..)

jim, the bottom edge of the inset doors are getting a trim treatment that carries threw the frnt and on each side which helps to balance the thicker bottom rails.. its that way for better attachment. 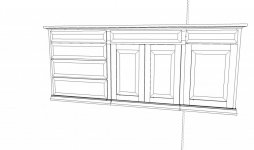 I voted for the second picture, but I'd re-do the right hand door a bit and make the inset panel shorter to match the height of the adjacent panels and make the top rail wider to compensate. All three panels would be the same height and line up top and bottom.

Neither. Knob goes center of the stile and on bottom line of rail. 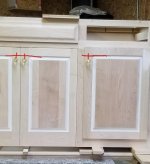 I voted for the top photo because of the visual balance within the door itself. But, I can't get past the question of why all doors aren't the same.

I see what they were going for with the overlay door trying to match the overlay drawer fronts opposite, but I think I would have just overlay on the two center doors also. I think since you mentioned these getting painted in your repair thread, the contrast of overlay and inset won't matter as much and since the knobs are close enough, I think keeping them on the same plane would look better, so still sticking with the original vote.

This is one of those questions where you'll get too many answers, I would suggest to pick the one you think is right but leave the final decision to the customer, after all their perception is the one that counts eventually, although you can make them see the options that definitely will not work or the ones that work best, and let them choose.
S

I agree with Wayne, top pic as my eye went right to the off set difference in the second photo.